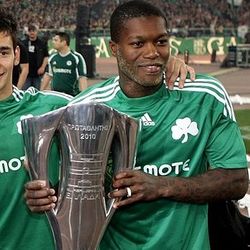 Djibril Cissé (born 12 August 1981 in Arles, France) is a French professional footballer who played in Greece for Panathinaikos. He is noted particularly for his speed and acceleration.

Cisse was born as a Muslim to Muslim parents but later converted to Christianity. His father, Mangué Cissé was formerly a professional footballer and had captained his country before his parents moved from the Ivory Coast to France in 1974. Djibril was the seventh and last child of his family.

Cissé started his career at AC Arles, in 1989, at the age of eight. After seven years at the club, he had a six-month spell at Nîmes Olympique before moving to Auxerre joining the club's youth system. Cissé spent two years in the system before graduating to the first team in 1998. After playing for Auxerre for six seasons, scoring 90 goals in 166 appearances, he moved to Liverpool in 2004, During his time at Anfield, he played 83 games, scoring 26 times. Towards the end of his Liverpool career, he had a loan spell at Marseille scoring 15 goals in 25 appearances before the deal was made permanent. Cissé returned to the Premier League once more in 2008 with a loan spell at Sunderland AFC, scoring 11 goals in 39 appearances.

On 25 June 2009, he signed a four-year contract with Greek side Panathinaikos. It was reported that the player would earn €2.5 million per year, while French club Marseille would get an estimated €8 million as a transfer fee. The total cost of the transfer is about €20 million, taking into account the various bonuses. He scored his first goal in Greece against Crete-based Ergotelis and soon he became the new leader of the team. He was the Superleague topscorer for the 2009–10 leading his team to the domestic double. In his first year in Greece, Cisse scored 23 goals in 28 matches.

Cisse's performances made Panathinaikos fans love him, and he became their football idol. He had stated that after making the double in Greece he would love to play again in the Champions League with Panathinaikos and looking for a successful season also in Greece. On 30 October 2010, he scored two goals in the Derby against arch-rivals Olympiakos Piraeus in a 2–1 home win. At the MVP award ceremony for the 8th fixture, Cisse said "I am not only a player of Panathinaikos, but I am also a fan".

On February 21, 2011, Olympiakos beat Panathinaikos 2-1 in a controversial game and after the final whistle, dozens of Olympiakos fans invaded the pitch and, amid the celebrations, several of them aimed kicks and punches at Cissé and some of his teammates including Cedric Kante, Simao Junior, Josu Sarriegi and Alexandros Tzorvas. Cisse stated that he was being racially abused by Olympiakos fans, and he would leave Greek Championship at the end of the 2010-2011 season. Cisse also suggested that Panathinaikos should have won the derby and were only denied by the referee Dimitris Kalopoulos’ decision to disallow what seemed a legitimate Panathinaikos goal by Kostas Katsouranis for offside and to allow a controversial Olympiakos goal in the 91st minute to stand. He stated that he has lost his patience with questionable refereeing in Greece: “I will make my decisions but believe me, I’ve had it up to here. I can’t go on under these conditions".

The 2011 season ended with Cisse winning a second top-scorer title in the Greek League with 20 goals. He subsequently moved to Italy to play for Lazio.

Cissé made his international debut, aged 21, against Belgium coming on as a 48th minute substitute for David Trezeguet on 18 May 2002. French coach Roger Lemerre included Cissé in his 23 man squad for the 2002 FIFA World Cup. In the tournament he played in all of the group matches against Senegal, Uruguay, and Denmark, coming on as a substitute in all three games but France were knocked out of the World Cup in the group stages. His first goal for the senior side came on 7 September 2002 against Cyprus in qualifying for Euro 2004. Cissé was included as part of the 2003 FIFA Confederations Cup winning French team. He scored his only goal of the tournament from the penalty spot in France's 1–0 win against Colombia on 18 June 2003.

After being banned from UEFA Euro 2004, the next tournament for Cissé was the 2006 FIFA World Cup in Germany. However, in France's final warm-up match against China on 7 June 2006, he suffered a broken leg when ten minutes into the game he was knocked off balance by the China captain Zheng Zhi and fell with his leg twisting under him. "It's so tough to hear Djibril scream like that," said fellow French striker Thierry Henry. "You lose a teammate and also a friend. But he is tough; he will come back." Immediate surgery to repair his open fractured tibia followed the accident, ruling him out of the tournament. During the UEFA Euro 2008 qualifying campaign, Cissé played three games, but could not win a place in the France squad for the finals.

In March 2010, Cisse was re-called to the French squad for the friendly against Spain in Paris due to his goalscoring form for Panathinaikos. When introduced into the match as a substitute, he had a considerable impact, heading on a Florent Malouda cross only for Iker Casillas to push it onto the post. On 11 May 2010, he was included by coach Raymond Domenech in France's final 23 man squad for the 2010 FIFA World Cup in South Africa. On June 22 he was in France's starting eleven for the team's final game of the group stage versus South Africa.