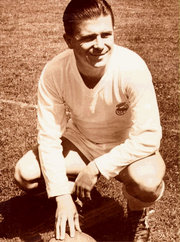 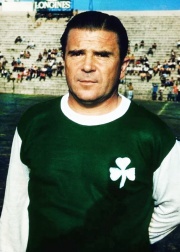 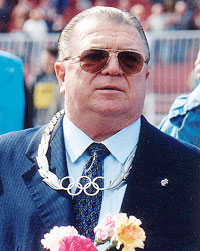 Also known as the "Galloping Major" because of the post he once held in the Hungarian army, Puskás possessed a ferocious left-footed shot (many claim it was the most powerful ever seen on a left foot) and was the star of the Hungarian national team of the late 1940s and early 1950s - nicknamed the "Magnificent Magyars" - which is considered the finest national team of its time and one of the greatest of all time.

Although he left school at the age of 12, he was a professional football player as a teenager. Puskás started his club career with Budapesti Honvéd in 1943. He moved to Real Madrid in 1958, and played for them when they won the UEFA Champions Cup three times (1959, 1960 and 1966), including the classic final in 1960 when they beat Eintracht Frankfurt 7-3. Puskás scored four goals, with Alfredo Di Stefano scoring three. This Madrid team was considered one of the finest teams to ever assembled to play the game. In his club career, he apparently totalled 511 goals, a number believed to be third all-time behind Pelé and Josef Bican.

Puskás played for the Hungarian Olympic team which won the Olympic gold medal in 1952. He made 85 appearances for the Hungarian national team between 1945 and 1956, scoring 84 goals. In the 1954 World Cup, Puskás led Hungary to the finals. The team was an overwhelming favorite to win the tournament, having gone unbeaten for three years, including impressive 6-3 and 7-1 victories over England. Despite defeating West Germany 8-3 in their final group match, Hungary lost Puskás to injury. Nevertheless the team cruised into the final and Puskas was declared fit for the game, but they somehow managed to lose 3-2 to the same Germans they had thrashed only days before even after taking a two goal lead.

Because of political reasons Puskás left Hungary in 1956 and immigrated to Spain where he played for Real Madrid. Puskás also appeared four times for the Spanish national team in 1961 and 1962, but did not score. His 83 international goals in 84 appearances were an all-time record (for men) until 2003, when it was broken by Iran's Ali Daei.

He eventually retired from playing in 1966. He returned to Hungary in 1981. He would coach teams in Spain, Australia, the United States, Canada, Paraguay, Chile, Saudi Arabia and Egypt until, in 1993, he took charge of the Hungarian national side for four matches. Yet the highlight of his career on the bench came in Greece with Panathinaikos FC, whom he guided to the European Cup final in 1971. Puskas would return to Greece in 1979 to coach AEK Athens.

Hungary's national stadium was renamed in his honor in 2001.

Puskas, who was in hospital for six years with Alzheimer's disease, died in Budapest at 0600 GMT on Friday, November 17, 2006, after suffering from a fever and pneumonia.

On June 2, 2011 - the fortieth anniversary of the 1971 European Cup final - Panathinaikos and the Hungarian Embassy in Athens jointly announced that a statue of Puskas will be erected at Leoforos Alexandras Stadium.