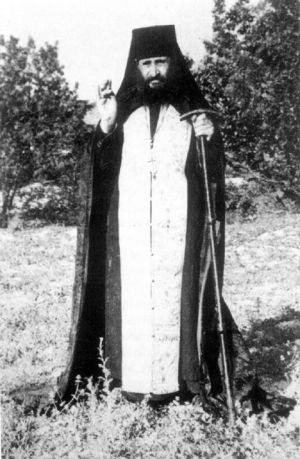 Saint George (Karslidis) the New Confessor of Drama (π. Γεώργιος Καρσλίδης ) was born in Argyroupolis, Pontos in 1901 of pious parents, Savva Karslides and Sophia. At baptism he received the name Athanasius. He is known to have been in Georgia, Armenia and Russia before spending most of his life in the village of Sipsa (now identified as Taxiarches) in Drama of Northern Greece. He established a small monastery there and slept in the Lord November 4, 1959. He was glorified by the Ecumenical Patriarchate on November 2, 2008. The elder was well known for his miracles and prophecies. The church commemorates his memory November 4. He is one of few saints known to bear an imprint of the sign of the cross on his skull.

While still being an infant, he was left orphaned and his grandparents looked after him and his two siblings; a brother and a sister. His brother did not treat him very well and noticing that this was a problem his grandparents gave him to a Turkish family to look after him at an early age. When he was seven years old, his grandmother, being a devout Christian, took him on a pilgrimage to an ancient and famous monastery in the Pontos area; the Panagia Soumela.

In 1930 he permanently settled in the village of Sipsa in Drama, where he had quite a few acquaintances such as his first cousin, Elder Gregory Kiourtsides. He did not have much of an estate bringing only a few previous items; a few ecclesiastical books, priestly vestments, icons and a portion of the relics of his sister Anna.

In 1936 the Elder went on a pilgrimage to Jerusalem. He visited many monasteries and also visited the Jordan river. At one of the hermitages near the Monastery of St. Savva he met in a wondrous way an ascetic who was his uncle. God enlightened the ascetic and revealed to him that the young clergyman passing by was his nephew.

In 1938 the Ministry of Agriculture granted four stremmata of land to the Elder. With the assistance of the villagers he built a little church, dedicated to the Nativity of the Theotokos. With the ever present help of the inhabitants, the construction of the monastery took place in the following year until eventually the consecration of the monastery church took place September 14, 1939.

In 1941 the Bulgarians captured the elder and led him to be butchered. He followed without protest and when they arrived at the place, he prayed and with calmness asked them to proceed with their work. They abandoned him out of fear and ran away.