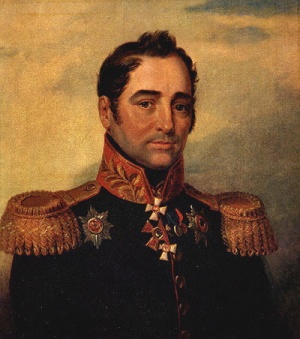 George Vlastos (Russian: Egor Ivanovich Vlastov; Greek: Γεώργιος Ιωάννου Βλαστός). Born: c. 1769 in Rethymnon, Crete, Greece - died: Jan 29, 1837, Russia. He was one of the first to graduate in 1790 from the Greek Cadets Corp.

He was at different times commander of 3rd infantry division. In 1822, at the age of 52, he resigned and for the next 15 years,he lived in his manor in Knjazhevo (or Kniagevo), Shuisky's district, Province of Vladimir, where he died on January 29, 1837. Today in Kniagevo, in the house where Vlastov lived, there is a school and its pupils carefully protect the tomb of the hero.