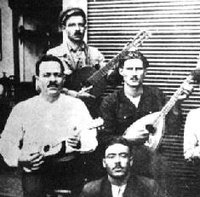 Giorgos Batis (left) and his students

Giorgos (George) Batis (or Abatis) was a Greek composer and lyricist of rebetiko music. His real name was Giorgos Tsoros and was born at Methana in 1885 or 1886. At the age of 8 his parents moved to Piraeus.

He was an expert baglama player and one of the most significant composers of the rebetiko music.

His recordings are very rare, and we know today only 16 of his songs. The reason is that after Ioannis Metaxas, the Greek Prime Minister, decided to prohibit the appearance of hashish, jail, and general anything related to the underworld from the recordings, Batis decided not to record songs any more.

His songs have a very special color that separates them from any other composer. He does not speak about the "society", he actually is an "observer" who describes very simple but with a unique art, themes like a gypsy girl, a stoker or a barber who fall in love.

Batis died on March 10, 1967. He was one of the Tetras, the Legendary of Piraeus group of musicians.