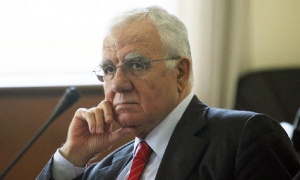 Kefalogiannis was born in Anogia, Rethymno prefecture, Crete on December 6, 1932. He studied at the University of Athens where he earned a doctorship in Medicine.[1]

Hailing from a family with a long tradition in politics, Kefalogiannis was elected to Parliament for the first time in 1958, backed by the National Radical Union, known as ERE. He was re-elected in 1961 and 1963.

Kefalogiannis actively resisted the military dictatorship and, following the restoration of democracy, joined New Democracy. He was continually elected to Parliament during the 1974 - 2004 period, serving a total of 14 terms.

Among the ministerial portfolios held by Kefalogiannis were the Ministries of Public Order, Interior and Tourism.