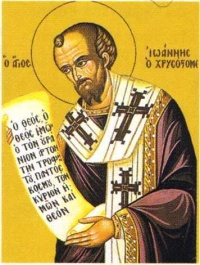 John Chrysostom (347 - 407) was a notable Christian bishop and preacher from the 4th and 5th centuries in Syria and Constantinople. He is famous for eloquence in public speaking and his denunciation of abuse of authority in the Church and in the Roman Empire of the time. He had notable ascetic sensibilities. After his death he was named Chrysostom, which comes from the Greek chrysostomos, "golden mouthed". The Orthodox Church honors him as a saint (feastday, November 13) and count him among the Three Holy Hierarchs (feastday, January 30), together with Saints Basil the Great and Gregory the Theologian. He is also recognized by the Catholic Church, which considers him a saint and a Doctor of the Church, and the Church of England, who commemorate him on September 13. His relics were stolen from Constantinople by Crusaders in 1204 and brought to Rome, but were returned on 27 November 2004 by Pope John Paul II.

He is sometimes referred to as John of Antioch, but that name more properly refers to John, the bishop of Antioch in A.D. 429-441, who led a group of moderate Eastern bishops in the Nestorian controversy. He is not to be confused with Dio Chrysostom.

He was born in Antioch of noble parents: his father was a high ranking military officer. His father died soon after his birth and so he was brought up by his Christian mother. He was baptised in 370 and tonsured a reader (one of the minor orders of the Church). He began his education under a pagan teacher named Libanius, but went on to study theology under Diodorus of Tarsus (one of the leaders of the later Antiochian school) while practising extreme asceticism. He was not satisfied, however, and became a hermit (circa 375) and remained so until poor health forced a return to Antioch.

He was then ordained a deacon in 381 by St. Meletius of Antioch, and was ordained a presbyter/priest in 386 by Bishop Flavian I of Antioch. It seems this was the happiest period of his life. Over about twelve years, he gained much popularity for the eloquence of his public speaking. Notable are his insightful expositions of Bible passages and moral teaching. The most valuable of his works are his Homilies on various books of the Bible. He emphasised almsgiving. He was most concerned with the spiritual and temporal needs of the poor. He also spoke out against abuse of wealth and personal property. In many respects, the following he amassed was no surprise. His straightforward understanding of the Scriptures (in contrast to the Alexandrian tendency towards allegorical interpretation) meant that the themes of his talks were eminently social, explaining the Christian's conduct in life.

One incident that happened during his service in Antioch perhaps illustrates the influence of his sermons best. Around the time he arrived in Antioch, the bishop had to intervene with the Emperor St. Theodosius I on behalf of citizens who had gone on a riotous rampage in which statues of the Emperor and his family were mutilated. During the weeks of Lent in 397, John preached twenty one sermons in which he entreated the people to see the error of their ways. These apparently had a lasting impression on the people: many pagans reportedly converted to Christianity as a result of them. In the event, Theodosius' vengeance was not as severe as it might have been.

In 398 he was called (somewhat against his will) to be the bishop in Constantinople. He deplored the fact that Imperial court protocol would now assign to him access to privileges greater than the highest state officials. During his time as bishop he adamantly refused to host lavish entertainments. This meant he was popular with the common people, but unpopular with the wealthy and the clergy. In a sermon soon after his arrival he said "people praise the predecessor to disparage the successor". His reforms of the clergy were also unpopular with these groups. He told visiting regional preachers to return to the churches they were meant to be serving - without any pay out.

His time there was to be far less at ease than in Antioch. Theophilus, the Patriarch of Alexandria, wanted to bring Constantinople under his sway and opposed John's appointment to Constantinople. Being an opponent of Origen's teachings, he accused John of being too partial to the teachings of that master. Theophilus had disciplined four Egyptian monks (known as "the tall brothers") over their support of Origen's teachings. They fled to and were welcomed by John. He made another enemy in Aelia Eudoxia, the wife of the eastern Emperor Arcadius, who assumed (perhaps with justification) that his denunciations of extravagance in feminine dress were aimed at herself.

Depending on one's outlook, John was either tactless or fearless when denouncing offences in high places. An alliance was soon formed against him by Eudoxia, Theophilus and others of his enemies. They held a synod in 403 to charge John, in which the Origen factor was used against him. It resulted in his deposition and banishment. He was called back by Arcadius almost immediately, however. The people were very angry about his departure. There was also an earth tremour which was seen as a sign of God's anger. Peace was shortlived. A silver statue of Eudoxia was erected near his cathedral. John denounced the dedication ceremonies. He spoke against her in harsh terms: "Again Herodias rages; again she is confounded; again she demands the head of John on a charger" (an allusion to the events surrounding the death of John the Baptist). Once again he was banished, this time to Cucusus in Armenia.

Pope Innocent I protested at this banishment, but to no avail. John wrote letters which still held great influence in Constantinople. As a result of this, he was further exiled to Pitiunt, where his tomb is the shrine for pilgrims. However, he never reached this destination, as he died during the journey. His final words were "Glory be to God for all things!"

During a time when city clergy were subject to much criticism for their high life style, John was determined to reform his clergy at Constantinople. These efforts were met with resistance and limited success. He was an excellent preacher. As a theologian, he has been and continues to be very important in Eastern Christianity, but has been less important to Western Christianity. He rejected the contemporary trend for allegory, instead speaking plainly and applying Bible passages and lessons to everyday life.

His banishments demonstrated that secular powers dominated the eastern church at this period in history. It also demonstrated the rivalry between Constantinople and Alexandria for recognition as the preeminent eastern see. This mutual hostility would eventually lead to much suffering for the church and the Eastern Empire. Meanwhile in the west, Rome's primacy had been unquestioned from the fourth century onwards. An interesting point to note in the wider development of the papacy, is the fact that Innocent's protests had availed nothing: demonstrating the lack of influence the bishops of Rome held in the east at this time.

The Homilies against the Judaizers

Chrysostom wrote of the Jews and of Judaizers in eight homilies Adversus Judaeos (against the Judaizers) [1].

The second discourse is only about a third of the length of the others. Researchers long suspected that the single manuscript in which it was preserved was incomplete. In 1999 Wendy Pradels discovered on the island of Lesbos a manuscript with the complete text.

The following quotes are translations found by Paul Halsall online at anti-Jewish sites, presumably from the original Greek; other researchers give slightly different translations. The accuracy of the citations is therefore uncertain.

At the time he delivered these sermons, Chrysostom was a tonsured reader, and had not yet been ordained a priest or bishop.

Many researchers believe that the purpose of these attacks was to prevent Christians from joining with Jewish customs, and thus prevent the erosion of Chrysostom's flock. A recent thesis is that he instead tried to persuade Jewish Christians (who for centuries had kept connections with Jews and Judaism) to choose between Judaism and Christianity (Source: Rodney Stark, The Rise of Christianity. How the Obscure, Marginal Jesus Movement Became the Dominant Religious Force in the Western World in a Few Centuries, Princeton 1997, 66-67 )

Christian clerics, such as R.S. Storr, refer to him as "one of the most eloquent preachers who ever since apostolic times have brought to men the divine tidings of truth and love", and John Henry Cardinal Newman described Chrysostom as a "bright, cheerful, gentle soul; a sensitive heart."

Two of his writings deserve special mention. He harmonized the liturgical life of the Church by revising the prayers and rubrics of the Divine Liturgy, or celebration of the Holy Eucharist. To this day, Eastern Orthodox churches typically celebrate the Divine Liturgy of John Chrysostom, together with Catholic churches that are in the Eastern or Byzantine rites. These same churches also read his Catechetical Homily at every Easter, the greatest feast of the church year.