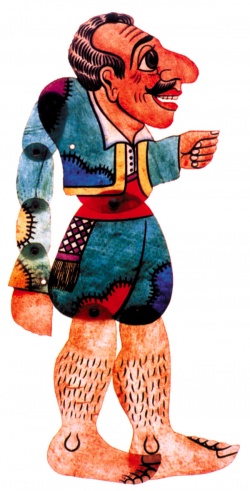 Karagiozis (Greek: Καραγκιόζης, from Turkish: Karagöz - black-eyed) is a shadow puppet and fictional character of Greek traditional folklore inspired from a Turkish counterpart who was known as Karagöz. He is the main character of the tales narrated in the Greek theatre of shadows. Karagöz in Turkish means 'black-eyed', and it is the origin of this character's name.

Karagiozis seems to have come to mainland Greece, probably from Asia Minor in the 19th century, during Ottoman rule. Karagiozis was hellenized in Patra, Greece in the end of 19th century by Dimitrios Sardounis alias Mimaros, who is considered the founder of modern Greek shadow theater.

The genre became a fully integrated, though adapted, amongst the Greek population. But there are several legends as well as studies surrounding Karagiozis' arrival and subsequent popularity in Greece. Some stories say that Greek merchants brought the art from China and others say that it was a Greek who created the "legend" during Ottoman rule for the entertainment of the sultan. Yet others believe that it originated from real events involving two masonry workers named Karagöz and Haci Ivat working in the construction of a mosque in the city of Bursa in early 14th century.

Karagiozis is a poor hunchbacked Greek, his right hand is always depicted long, his clothes are botched, and his feet are always bare. He lives in a poor cottage with his wife Aglaia and his three boys, during the times of the Ottoman Empire. The scene is occupied by his cottage in the left, and the Sultan's Palace (Sarayi) on the far right.

Because of his poverty, Karagiozis uses mischievous and crude ways to find money and feed his family.

Students of folklore divide Karagiozis' tales in two major categories: the 'Heroics' and the 'Comedies'. The Heroics are tales based on tradition or real stories involving the times under Ottoman rule, and Karagiozis is presented as a helper and assistance of an important hero.

Puppeteers devise their own original tales, however there are many 'traditional' tales that have descended orally from earlier puppeteers and are accepted as 'canon' with slight alterations between the players. Most of the are formulaic and have the following layout but with a wide improvisional variety, and often involving interaction with the audience:

Some of the most known Heroic tales are:

Some of the most known comedies are:

Some players have introduced other characters, like Karagiozis's old father or the Pasha's beautiful daughter.

Karagiozis, as well as all the figures that represent the characters of his tales, are two dimensional and designed always in profile. They were traditionally made from camel skin, carved to allow light through the image, creating details, but are today most often made of cardboard. Traditional puppets gave off black shadows against the white screen, but some more recent puppets have wholes covered with colored silk or plastic gel materials to create colored shadows. The torso, waist, feet and sometimes the limbs, were separate pieces that were joined together with pins. Most figures were composed of two parts, torso and legs, with only one joint to the waist. Two characters, the Jew and Morfonios had joints in the neck, and had a flexible head.

They were moved with a stick attached to them, except in the case of the figure of Karagiozis and a few other characters whose arms or other limbs required separate movement. The 'scene' was a vertical white parapet, usually a cloth, called 'perde' (curtain). Between the figures and the player (who was invisible), were candles or lamps that shed light to the figures and made their silhouettes and colours visible to the audience through the cloth.

In Greek daily speech, the name Karagiozis is also used as an insult more or less like Joker. Puppeteers complain about this, saying that while Karagiozis can be violent, mischievous, a liar and an anti-hero, he is also good-natured and faithful, so his name should not be used as an insult.

During the decade of 1980s, Greek Television had Karagiozis shows on a weekly basis. These shows had more modern themes, like for example Karagiozis living some myths of Greek mythology or visiting the moon and other planets. Some of these episodes were either live with an audience, or filmed especially for the TV show and contained scenes that required editing or special effects.

Since the 2000s, Karagiozis is not so popular as a choice of recreation for young kids and the number of puppeteers has diminished. Today, he is performed mostly in folk feasts or festivals and on national Greek television. There are also occasional tours in the Greek diaspora.