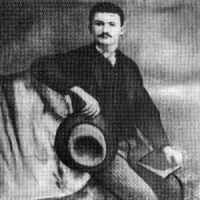 Kostas Krystallis was a Greek writer and poet of the 19th century.

Krystallis was born in Syrrako, Epirus - the birthplace of PM Ioannis Kolettis - in 1868. In 1880, he moved to Ioannina where he attended the Zosimas School. Seven years later, he published his first work "Shades of Hades" which recounted stories of the Greek War of Independence of 1821. Because of this, he was persecuted by the Ottoman authorities of Epirus and had to flee to independent Greece. He was tried in abstentia and sentenced to 25 years in exile.

In Athens, he worked in a publishing house while writing poetry. In 1891, he was hired as an editor for a magazine called "Evdomas" but he quit within a year due to inability to get along with management. He then worked on the rail roads but came down with tuberculosis and died οn April 22, 1894 at his sister's house in Arta.

Krystallis' early works were heavily influenced by Aristotle Valaoritis. Later he changed, adopting the common demotic version of the Greek language and showing the influence of the "New Athenian School" of literature - of which Kostis Palamas was the prime representative - in his works.