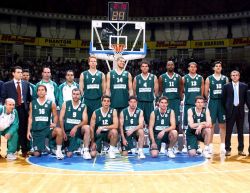 Papadopoulos was born in Krasnodar, Russia, on June 3, 1980. After moving with his family to Thessaloniki in 1990, he started his basketball career at local club Stavroupolis in 1995. In 1997, he moved up to Iraklis where he played for three seasons before joining Panathinaikos.

Papadopoulos returned to Iraklis in 2003 and the following year joined Dinamo Moscow. After that Papadopoulos played for Real Madrid (Spain), Fortitudo Bologna (Italy), PAOK, Khimki (Russia), Olympiakos, again PAOK and Canarias (Spain) before retiring in 2014. Papadopoulos was winner of the Euro League with the Greens in 2002 and the Reds in 2012.

He has been capped 103 times by the National Basketball Team of Greece, with 847 points to his credit. He was winner of Eurobasket 2005 and runner-up in the World Cup of 2006.

Lazaros Papadopoulos is an accomplished swimmer and chess player.