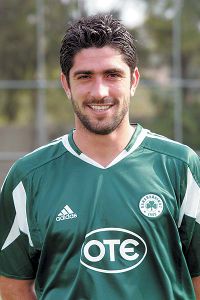 Konstantinou got his start in professional football playing for Enosis Neon Paralimni FC, but was picked up by Iraklis FC in 1997. His fame grew significantly during his stay at Iraklis, spurred by his goalscoring record: In 119 games, he scored 60 goals. In 2001, Panathinaikos bought him for €11.3 million, which was the highest price ever paid in the annals of Greek football. With Panathinaikos, he had the opportunity to play in the Champions' League and earned praise for his role in the team's performance there, especially in his first year with the club. He is also a mainstay of the Cyprus National Football Team and he has scored 19 goals in 46 appearances for Cyprus. On July 14, 2005, although he had repeatedly told the Panathinaikos administration that he would either stay in Panathinaikos or go to a foreign team, he became a player of Olympiakos, signing a 3-year contract. After an unsuccessful stint with Olympiakos, Konstantinou returned to Cyprus in 2009 to play for Omonia FC.

In 2011, he signed with Anorthosis Famagusta and the following year with AE Limassol.

The spearhead of the Cypriot attack, he made his international debut against Albania in August 1998 and subsequently averaged almost a goal every other game in his first 35 caps. His blossoming coincided with his nation's vast improvement as a footballing force, although they failed to reach the play-offs for either the 2000 or 2004 European Football Championship.

Over all, Konstantinou has so far (November 2012) registered 85 international appearances with 32 goals scored.