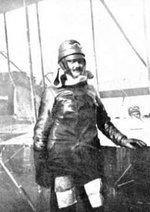 Mihail Moutousis, one of the first pilots 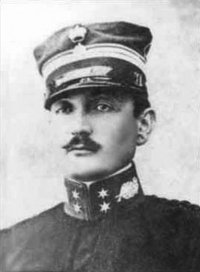 First Lieutenant Corp of Engineers Mihail Moutousis (or Moutoussis, or Montoussis) was one of the first pilots to fly for the Hellenic Air Force.

Operational requirements by the Hellenic Navy led to the creation of the Naval Aviation (Naval Cooperation Air Force). Naval Aviation acquired her first hydroplane in November 1912. First pilot for this new naval weapon was First Lieutenant Mihail Moutousis who was recalled from the Epirot front. On November 17 1912 the aircraft was officially presented to the Navy, and named Nautilos.

First training flight took place on January 21 1913 with Moutousis and Ensign Aristidis Moraitinis flying all the way to the island of Tenedos. The first operational flight took place on January 24 1913 with the same crew. On that day, the two crew members not only bombarded the Turkish Navy in the Bay of Nagara, they also reported the location of Turkish ships to the commander of the Hellenic Navy located in Moudros, Limnos. The mission took 2 hours 20 minutes, and the distance traveled totaled some 180 kilometers. This was the first ever combat mission involving naval forces or naval aviation in the world!