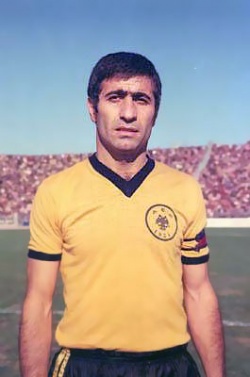 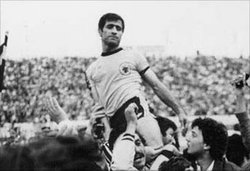 Mimis Papaioannou carried on the shoulders of fans. 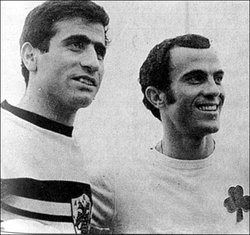 Mimis Papaioannou was one of AEK's most historic players. He was born on August 23, 1942 and began his career at Nea Genea in the town of Nea Nikomedia near Veria. He joined AEK in time for the 1963 season for the paltry sum of 140,000 drachmas. Papaioannou proved an instant success helping AEK win their first post-World War II title, scoring twice in the final playoff game of the season against Panathinaikos.

The following year he was crowned top scorer of Greece replacing teammate Kostas Nestoridis who had, up until that year, won the title five consecutive times! Mimis Papaioannou would help AEK win championships again in 1968, 1971, 1978 and 1979.

In 1980, Papaioannou stopped playing in Greece and continued his career at Pancyprian FC of New York as a player-coach. He led that club to the championship of the North American continent and attracted the attention of North American Soccer League (NASL) scouts (at the age of nearly 40 years old!)

When his playing career was finally over, Papaioannou tried his hand at coaching (Kerkyra FC, etc.) without much success. He scored a record 234 goals in the Greek A League which was to be surpassed by his teammate Thomas Mavros.

Papaioannou was capped 61 times by the National Football Team of Greece scoring 21 goals. His 61 caps was a record at that time and stood from 1978 till Nikos Anastopoulos got his 62th cap in 1987. Papaioannou was the first Greek player to reach 50 caps. During his career many teams sought his services, most notably Real Madrid during the mid-1960's.