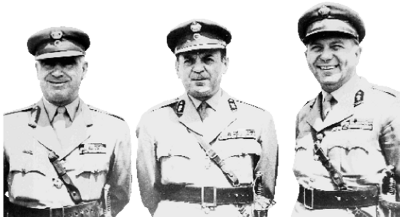 Pattakos, Papadopoulos and Makarezos - the three leaders of the 1967-74 Junta

Nikolaos Makarezos (Greek Νικόλαος Μακαρέζος) was a Greek military man who took part in the coup d'etat of 21 April 1967 and, along with George Papadopoulos and Stylianos Pattakos, became a part of the triumvirate that led the Junta during most of its seven years in power.

He was born in 1919 in the village of Gravia, Phthiotis prefecture. Having distinguished himself in World War II, Colonel Makarezos met Colonel George Papadopoulos after the war. Later the two men would meet Brigadier General Stylianos Pattakos. Together, the three men planned the coup d' etat that would overthrow the government of Panagiotis Kanellopoulos, taking advantage of the volatile nature of Greek politics of that time.

Makarezos was Vice-President of most of the ensuing dictatorial governments with special responsibility for the country's economy. After the Junta's fall in 1974, Makarezos was put on trial for treason and rebellion and was sentenced to death. His sentence was later commuted to life imprisonment.

Makarezos was set free, on successive temporary leaves, from 1990 until his death in 2009. He claimed to have regrets for many of his actions yet boasted about his economic achievements of the 7-year era.