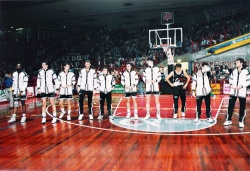 1994 Korac Cup winner with PAOK BC 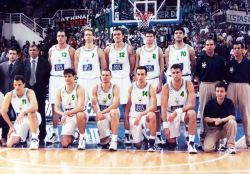 Boudouris was born on September 25, 1971 in Volos, Thessaly. He started his career with the youth team of Olympiakos Volos BC. After impressing in the finals of the Panhellenic youth championship, he moved to PAOK, in 1989, at the age of 18.

As a PAOK player, Boudouris won the Greek championship in 1992 and the Greek Cup in 1995. Internationally, he won the European Cup Winners' Cup in 1991 and the Korać Cup in 1994.

Following that, Boudouris moved to Olympiakos where he won the Cup in 2002.

In 2003, he joined Makedonikos and, the following year, Maroussi. At Maroussi, he won second place in the regular season in 2005 and played in the Greek Cup in 2006.

Boudouris left Maroussi in 2006 for Olympias Patra but returned the following year. He retired in 2008.

Boudouris was capped 102 times by the National Basketball Team of Greece, scoring 449 points. He was a member of the Greek squads that won fourth place in the 1994 and the 1998 Mundobaskets.