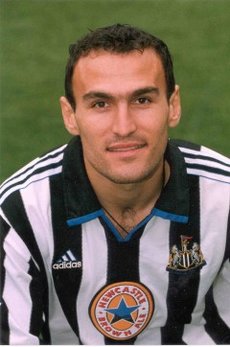 He joined Pontioi Veria as an 18 year old.

As a player for Pontioi Veria, where he remained for three consecutive seasons, he played one year on the third division and two in the second. His big career break came when he was 21. He got an offer from Olympiakos, one of the biggest teams in Greece.

He moved to Piraeus, the well-known port of Athens, and helped his new team win the Greek championship twice, something quite impressive considering the fact they hadn't won it for ten years. He also took part in his first Champions' League games. After three and a half seasons with Olympiakos he received an offer from Newcastle United, which opened to him the doors to the English football fields and the exciting world of the Premier League.

He signed with Newcastle Utd in 1998. His initial four-year contract, which was to expire in 2002, was renewed well ahead of time and was to see Nikos in the team until June 2004. During his stay in England he was object of one of the most beautiful goals ever scored in the Premier League as Dutchman Dennis Bergkamp scored after a brilliant pirouette with Dabizas in his back on March 2, 2002.

Being left out of the first squad since the spring of 2003, Nikos had no option but to seek a transfer. A car accident prevented him from moving during the summer transfer window. Still the decision to move was enforced as Nikos did not see any action when the new season started and as soon as the transfer window was reopened he accepted an offer from Leicester City.

Nikos played regularly for City as they battled to stay in the Premier League, but their efforts were not adequate and the team was relegated to Division One. It seemed like it was going to turn out to be a very disappointing season, but the season was far from over. Nikos was selected for the Greek squad but never saw any action as an injury kept him at the sidelines. To everyone's surprise, Greece went on to win the tournament, ending a season that had many turning points.

After the Euro, Nikos had to choose whether he would stay with Leicester for one more season or get a transfer to another club (he had a relegation clause in his contract). He chose to continue with Leicester and help the team return to the Premier League.

As Leicester did not offer a new contract to Nikos, he started looking for a new team. In August 2005, he signed a three year contract with AE Larisa, after failing to impress in a tryout with Belgian team Anderlecht. Dabizas won the Greek Football Cup in 2007 with his team and was voted MVP of the final.

On October 25, 2011 and still playing for AE Larisa, Dabizas announced his retirement as a player. He played 548 games and scored 32 goals for his clubs. Dabizas was capped 70 times without scoring for Greece.