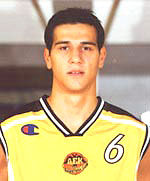 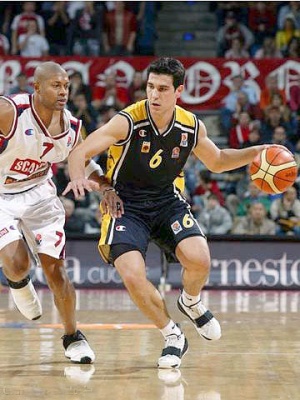 Nikos Zisis, born August 16, 1983 in Thessaloniki, Greece, is a retired basketball player. He was a key contributor to Greece’s triumph at Eurobasket in Belgrade the summer of 2005, ans was named Young Player of the 2005 Year by FIBA Europe, the sport’s governing body on the continent.

Zisis has been a winner at every stage of his career so far. At the Europeans, he won silver at the 1999 Under-16 tournament, bronze at the 2000 Under-18 event, and gold at the 2002 Under-20 championship, where he was also named the tournament’s MVP.

At the 2005 Eurobasket tournament, Zisis led the scoring in Greece’s win over host nation Serbia-Montenegro, but more importantly, chose his moments to pick up the offensive slack.

This aspect of his game was made clear in the elimination game against Israel when he tallied 23 points (7/10 shooting) and six assists in Greece’s important 67-61 victory.

Zisis also rose to the occasion in the tournament’s semifinal and final with 11 and 13 points, respectively.

Besides his senior-level participation at Eurobasket, the Nikos Zisis has also represented Greece in the Olympic Games.

At club-level competition, Zisis excelled in 2005 with his former Greek club AEK in the Euroleague. AEK fans still recall his three-pointer on the buzzer against Efes Pilsen for a 70-69 win.

He helped his former Greek club win the Greek Cup in 2001 as well as the league title the following year.

Zisis’s statistics were among the best of all of the Euroleague’s young players in 2005, which eventually drew the attention of top European clubs. Nikos Zisis signed with Benetton Treviso following Eurobasket. He stayed there for two years before moving on to CSKA Moscow in 2007. In 2009 Zisis moved to Italy to play for Montepaschi Siena. In 2012 he went to Spain to play for Bilbao Basket. Next stage in his career was Unics Kazan in [[2013]. After only one year Zisis went to Turkey to play for Ülker Fenerbahce. In 2015 Zisis joined German club Brose Bamberg. After four years in Germany, Zisis played one year for Joventut Badalona and ended his career at AEK.

His 189 caps for the National Basketball Team of Greece puts him on #4 on the list of alltime appearances. He scored a total of 1,455 points and this makes him the #16 on Greece’s alltime topscorer list.

In an interview posted on FIBA’s website following his award victory, Zisis attributed his attraction to basketball to Greece’s first European title victory in 1987, while admitting that he barely recalled the occasion. At the time, Zisis was almost 4 years old.

“I don’t remember 1987, but my father tells me that it was the first time I asked him to take me to a basketball court. Obviously, I couldn’t quite carry the ball, or even bounce it, but it was like a bug in my body following my first experience. I couldn’t get away from it,” said Zisis. “I adore basketball, the atmosphere in the locker rooms before a big game, the satisfaction felt after victory, even the feeling after defeat, which simply makes your urge to win stronger. I can’t imagine my life without basketball.”