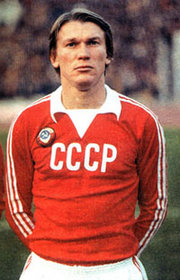 Oleg Blokhin, leader for the USSR 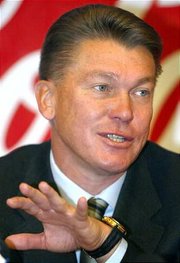 Oleg Volodymyrovych Blokhin (born November 5, 1952 in Kiev, Soviet Union) is a Soviet/Ukrainian soccer striker and coach. He was named European Footballer of the Year in 1975.

Playing for Dynamo Kiev, Blokhin is the all-time leader in games (432) and goals (211) in the USSR National Championship, which he won 8 times. He led Dynamo to the UEFA Cup Winners' Cup in 1975 and 1986. Blokhin is the all-time cap (112) and goal (42) leader for the Soviet Union, playing in the 1982 and 1986 World Cups. He was one of the first Soviet players to play abroad, signing with Austria's Vorwaerts Steyr in 1988 and also playing in Cyprus with Aris Limassol.

After retiring as a player, Blokhin coached Greek clubs Olympiakos, PAOK and Ionikos. He served as the head coach of the Ukrainian national team from September 2003 through December 6, 2007, when he resigned from his post in the aftermath of Ukraine's disastrous Euro 2008 qualifying campaign.

In 2002 Oleg Blokhin was elected the member of Verkhovna Rada (Ukraine's parliament) for the second term. In October 2002 he joined SDPU parliament group. Recently Oleg showed no political activity, concentrating on coaching job.

Blokhin has been married to Iryna Deryugina, the prominent Soviet/Ukrainian gymnast, few times world champion in free-stand exercise. They have a daughter.