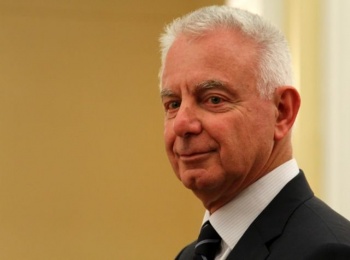 Panagiotis Pikrammenos is a Greek judge who became Prime Minister of a caretaker government on May 17, 2012.

Pikrammenos was born in Athens on July 26, 1945. He graduated from the German School of Athens, in 1963, and from the Law school of Athens University in 1968. Afterwards and until 1973, he practiced Law in Athens before gaining his post-graduate DES de Droit Public degree at Paris II University.

On May 16, 2012, Pikrammenos was appointed caretaker Prime Minister of Greece by President Karolos Papoulias as the elections of May 6 proved to be inconclusive. His government was sworn in on May 17.

He stepped down on June 20, 2012 when Antonis Samaras was sworn in.

Pikrammenos is married to the former Athena Noutsou. They have one daughter.
He speaks fluently French, English and German.
He is a fanatic supporter of Olympiakos.