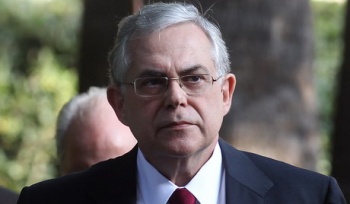 Lucas Papademos is a Greek economist and banker who became Prime Minister of Greece as head of a national unity government.

Papademos was born on 11 October 1947 in Athens, to a family that hailed from Desfina, Phocis prefecture, Central Greece. He attended the Massachusetts Institute of Technology (MIT), gaining a Bachelor's degree in Physics in 1970, a Masters degree in Electrical Engineering in 1972 and a doctorate in Economics, in 1978.

In parallel to his professional career, he taught Economics at Columbia University from 1975 until 1984 and at the University of Athens from 1988 to 1993.

In 2002, Papademos became the Vice President of the European Central Bank. He held that position until 2010, when he resigned to become adviser to PM Giorgos Papandreou.

In 2006, he was elected a member of the Academy of Athens.

In November 2011, Papademos was proposed as head of an interim, national unity government to pull Greece out of its economic crisis. He was sworn in on November 11, 2011 heading a government with ministers from the Panhellenic Socialist Movement (PASOK), New Democracy and the Popular Orthodox Rally (LAOS) parties.