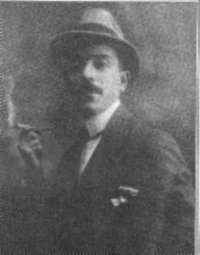 Panayiotis Toundas was born in Smyrna in 1885/1886. His family were fairly wealthy. From an early age he learned to play the Mandolin, as well as other instruments. Around the turn of the century he joined "The Politakia" - a Smyrna ensemble run by Sideras. He worked alongside the greatest musicians in Asia Minor including Ogdhondakis, Papasoglu and Spiros Peristeris.

Toundas started to compose songs from around 1910. Many of his songs were recorded and became hits prior to 1922, and he was instrumental in defining the Smyrnaic sound. He also toured extensively in Egypt, Africa and Europe. He came to Athens in 1923 and lived in the Nea Smyrni area.

At first Toundas worked as a Mandolin player in Taverns but in 1924 he became a director of ODEON record company. His first composition to appear on 78RPM in Greece was "Smyrnia" in 1924 sung by the tenor Misailidi. Toundas' compositions became very popular and were leased to all the foreign record labels.

In 1929, Toundas discovered Roza Eskenazi singing in TSITSIFIES and he arranged for Roza to record some sides, kick starting her recording career. They continued to work together successfully throughout the 1930s.

In 1931, Toundas became director of the Columbia label. His songs continued to be amongst the most popular and he worked with the greatest musicians and singers of the day. From 1934, Toundas began to use bouzouki and baglama in recordings of songs. He continued his illustrious career through to 1941 when the Germans entered Athens.

Toundas died on 23 May 1942 in his house in Nea Smyrni. He was survived by his wife and one daughter, but I don't know if he has surviving descendants today.

Toundas ongoing popularity is shown not only in the ongoing re-releases of his orginal recordings, but also in the esteem in which he is held by Greek musicians today. His songs have been re-recorded by Alexiou, Glykeria, Dalaras etc.

When interviewed in 1972, Roza said that Toundas was the greatest composer of them all and she acknowledged his part in her story "If it weren't for Tountas, there would be no 'legendary Roza'".