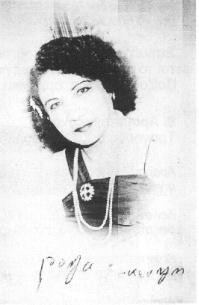 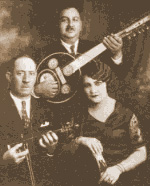 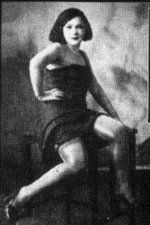 Roza posing for a cabaret photo 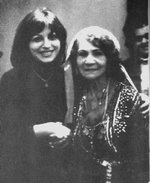 Born in Istanbul to a Sephardic Jewish family. Her given name was Sarah Skinazi. Her father Avraam or Abraham Skinazi, had a storage facility and was paid to store goods for people, most often for those leaving the country for a long period of time. Of Flora, Roza's mother, there are no documented facts. Roza had one sister (name unknown) and two brothers, Sami and Nisim. Roza Eskenazi came to Thessaloniki, Greece as a young girl and made a name in rebetika music with her coquettish voice. Roza's exact date of birth is not known. In her autobiography "Auta Pou Thimame" ("What I Remember") she states she was born in 1910. The autobiography, published in 1982, is derived from interviews Roza gave in 1972. By 1972, Roza had outlived all her siblings. Apart from being forgetful by then, Roza appears to have deliberately concealed her age (she probably had done so since the 1920s). Some, like the musicologist Panayiotis Kounadis, believe that Roza was born between 1883 - 1887, whilst others state she was born between 1890 - 1900.

Roza's early years are documented very poorly. In her autobiography, Roza states that the family moved to Komotini, but she could not remember how long she stayed there. It is interesting that her father Abraham stayed in Thessaloniki during this period, but it is unclear whether this was for economic or domestic reasons.

Roza and her mother returned to Thessaloniki where they lived in a house shared with ladies who danced and worked at a beautiful theatre called "Grand Hotel" (the artists lived in apartments above Roza's). Roza took the ladies clothes to and from the theatre and became bewitched by the theatrical world. She wanted desperately to be an artist and would practice at home in front of a mirror.

Eventually, Roza one day took to the stage of the "Grand Hotel" and danced. Roza received a beating when her mother found out. Roza's family were determined that she would not become an artist. Roza was so passionate and sure of what she wanted that, despite being frightened, she could not be disuaded. How this conflict with her family was resolved is not recorded.

Around 1910 Roza began to work with an Armenian troupe in Piraeus. The troupe was run by Saramous and Zabel and Roza performed at Theaters and Taverns. Roza initially mainly danced, but shortly therafter she also started singing in Greek, Turkish, and Armenian.

At some point early in her career, her first name of Sarah was dropped and Roza (or Rozitsa) adopted. This may have been because Roza's family did not approve whatsoever of her career choice? However, the date and reason for change is not documented.

In her autobiography, Roza states that she did not work in "Cafe-Amans" (a cafe where singers would improvise songs) or "Cafe-Satans" (cabarets). She infers that these places were disreputable. However, it is likely that Roza did indeed work in Cabarets, as, although there is little documented facts, a still of Roza from 1915 appears to be of a typical Cabaret singer (this may also be part of the explanation of what Roza was doing during the years that Roza tried to keep hidden by changing her age so drastically).

She made her first record in 1929. In the 1950s she toured extensively the United States with much success becoming a favourite of many a Greek-American at that time. Roza also returned to Athens and purchased a large house in Kipoupoli, Peristeri, where she lived for the remaining years of her life.

Roza recorded 45RPMs for RCA in the early to mid sixties, both re-workings of songs she had recorded in the 1930s, and new songs.

With the revival of rembetica music in the early to mid 1970s, Roza's legacy was brought to the attention of a new generation, and she was in demand once again. It is amazing that, despite being between 75 - 85 years old, Roza performed live, singing and dancing in concerts and appeared on TV.

On one TV appearance in 1975, Roza met with Haris Alexiou, a modern Greek diva who had some of Roza's songs in her repertoire. Roza sang "Hariklaki" and "Dimitroulla" although her voice was - understandably - much coarser since her heyday.

Roza died on December 2, 1980 and lies in an unmarked grave at the village of Stomio on the Gulf of Corinth.

Some of her well-known hits