Photius I of Constantinople 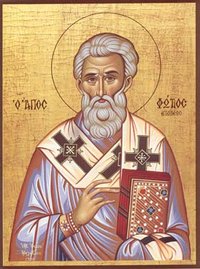 Photius (b. Constantinople ca. 820 - d. Bordi (Armenia), February 6, 891) is widely regarded as the greatest patriarch of Constantinople (858-861 and 878-886) since the times of John Chrysostom. He was later recognized as a Saint by the Eastern Orthodox Church. ("Photius" is a westernized spelling, especially in its use of the letter "u", resulting from adaptation of the name to the Latin language. In Greek, the name is Φώτιος)

Little is known of his origin or family. His Byzantine biographers reported that Emperor Leo VI once angrily called him "Khazar-faced", but whether this was a generic insult or a reference to his ethnicity is unclear.

As soon as he had completed his own education, Photius began to teach grammar, rhetoric, divinity and philosophy. The way to public life was probably opened for him by the marriage of his brother Sergius to the princess Irene, sister of Theodora, who upon the death of her husband Theophilus in 842, had assumed the regency of the empire. Photius became captain of the guard and subsequently first imperial secretary.

The dissension between the patriarch Ignatius and Bardas, the uncle of the youthful Emperor Michael III, brought promotion to Photius. Ignatius was arrested and imprisoned (858), and upon refusing to resign his office was deposed, while Photius was inducted into the priesthood within six days, and was installed as patriarch in his place.

Ignatius continued to refuse abdication. His cause was taken up by Pope Nicholas I in a manner highly offensive to the independence of the Eastern Church. Photius became the champion of Eastern Christianity against Latin pretensions; and when in 863 Nicholas finally anathematized and deposed him, he replied with a counter-excommunication.

The situation was suddenly changed by the murder of Photius's patron, Bardas, by order of the emperor Michael, who was himself assassinated by his colleague Basil I in the following year (867). The fall of Photius followed; he was removed from his office and banished about the end of September 867, a few days after the accession of Basil, and Ignatius was reinstated on November 23. About 876 Photius was suddenly recalled to Constantinople and entrusted with the education of Basil's children. On the death of Ignatius, probably in October 878, Photius, after a decent show of reluctance, again filled the patriarchal throne.

He then obtained the formal recognition of the Christian world. In November 879 a synod was convened at Constantinople. The legates of Pope John VIII attended, prepared to acknowledge Photius as legitimate patriarch, a concession for which John was much censured by Latin opinion. He stood firm, however, on the other two points which had long been contested between the Eastern and Western Churches, the ecclesiastical jurisdiction over Bulgaria and the introduction of the "filioque" clause into the creed (see also filioque clause). He disowned his legates, who had shown a tendency to yield, again excommunicated Photius, and thus aroused the open hostility which eventually led to the Great Schism in 1054. Strong in the support of Synod, Photius ignored him.

At the height of success, he was suddenly brought down by another palace revolution. After the death of Basil (886), his son and successor Leo VI, who had formerly been devoted to Photius, but in recent years displayed great hatred toward him, deprived him of his office and banished him to the monastery of Bordi in Armenia. From this time Photius disappears from history. No letters of this period of his life are extant. The precise date of his death is not known, but it is said to have occurred on February 6, 891.

The most important of the works of Photius is his renowned Bibliotheca or Myriobiblon, a collection of extracts and abridgments of 280 volumes of classical authors (usually cited as Codices), the originals of which are now to a great extent lost. The work is specially rich in extracts from historical writers.

To Photius we are indebted for almost all we possess of Ctesias, Memnon, Conon, the lost books of Diodorus Siculus, and the lost writings of Arrian. Theology and ecclesiastical history are also very fully represented, but poetry and ancient philosophy are almost entirely ignored. It seems that he did not think it necessary to deal with those authors with whom every well-educated man would naturally be familiar. The literary criticisms, generally distinguished by keen and independent judgment, and the excerpts vary considerably in length. The numerous biographical notes are probably taken from the work of Hesychius of Miletus.

The Lexicon, published later than the Bibliotheca, was probably in the main the work of some of his pupils. It was intended as a book of reference to facilitate the reading of old classical and sacred authors, whose language and vocabulary were out of date. The only manuscript of the Lexicon is the Codex Galeanus, which passed into the library of Trinity College, Cambridge.

His most important theological work is the Amphilochia, a collection of some 300 questions and answers on difficult points in Scripture, addressed to Amphilochius, archbishop of Cyzicus. Other similar works are his treatise in four books against the Manichaeans and Paulicians, and his controversy with the Latins on the Procession of the Holy Spirit.

The chief contemporary authority for the life of Photius is his bitter enemy, Nicetas the Paphlagonian, the biographer of his rival Ignatius.