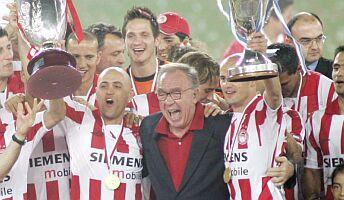 Socrates Kokkalis is a Greek businesman who, in the past, has been listed 421st on Forbes 2001 list of world billionaires and has been awarded with the title Greek businessman of the year in January 2002 by Price Waterhouse Cooper.

Socrates Kokkalis (born May 27, 1938) grew up in East Germany and was educated in Berlin and Moscow before returning to Greece, where he established telecoms suppliers Intracom.

He became president of Olympiakos Piraeus football and basketball clubs at a time of crisis following the George Koskotas scandal.

In February 2002, Mr Kokkalis resigned his position as vice-president of the League of Professional Clubs (EPAE) citing differences with fellow club chairmen. During the same period, according to reports in Greek daily Kathimerini, German authorities have sent evidence to Athens prosecutor Dimitris Papangelopoulos of alleged links with the Stasi.

In July 2010, Kokkalis transferred ownership of Olympiakos to shipowner Vangelis Marinakis ending an era of unprecedented success for the club.