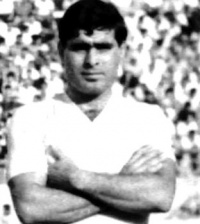 Nicknamed "The Rock" (ο βράχος), Tasos Vasiliou was one of the best football centre backs of the 1960s.

His career ended abruptly in 1969 allegedly after interference by junta-appointed Secretary General of Sports, Costas Aslanidis, himself. Vasiliou played a few more years for Ionikos in the lower divisions before quitting altogether.

After his playing days were over, he became a successful food-stuffs merchant.

During his career, he was capped 10 times by the National Football Team of Greece.