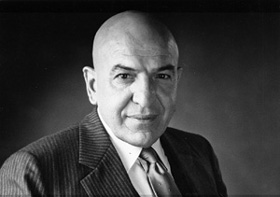 Telly Savalas (January 21, 1924 – January 22, 1994) was a Greek-American film and television actor who fathered 8 children. He was nominated for an Oscar in 1963 in his first starring movie, Birdman of Alcatraz. He was also best known for his work on the Kojak television series, and for playing Ernst Stavro Blofeld in the James Bond film On Her Majesty's Secret Service.

He was the second oldest of five children born to Christina Savalas, who was a New York City artist, and Nick Savalas, a Greek restaurant owner, as Aristotelis Savalas in Garden City, New York. He had his first job at age 8 in 1932, as a newspaper boy, while he constructed a shoeshine stand made of crates. When he entered Sewanhaka High School in Floral Park, New York, he initially only spoke Greek, yet he learned English and graduated in 1942. Telly Savalas gained life experience with a three-year stint in the Army during WWII, working for the U.S. State Department hosting the "Your Voice of America" series and then at ABC News before beginning an acting career in his late 30s.

As first, executive director and then senior director of news special events at ABC, Savalas became an executive producer for the "Gillette calvalcade of Sports", where he gave Howard Cosell his first job. Savalas first acted on the TV show Armstrong Circle Theater (1959) and then on the series "The Witness" as Lucky Luciano, where actor Burt Lancaster "discovered" him. Savalas was cast opposite Lancaster's idealistic D.A. in the melodrama The Young Savages (1961). He moved on to play a string of heavies, winning acclaim and an Oscar nomination for Best Supporting Actor for his performance as the sadistic Feto Gomez in Birdman of Alcatraz (1962). After portraying Pontius Pilate in The Greatest Story Ever Told (1965), he chose to remain completely bald and this signature look, somewhere between the comic and the ominous, stood him in good stead in the years that followed.

Savalas was memorable in The Dirty Dozen (1967), the seminal ensemble action film by director Robert Aldrich, and reappeared as a different character in two TV movie reprisals. He also appeared as star in two classics, Kelly's Heroes (1970), and The Scalphunters (1968), a western that revealed the absurdity of racism during the Civil Rights movement. His career was transformed with the lead role in the celebrated TV-movie The Marcus Nelson Murders (CBS, 1973) where the pop culture icon of Theo Kojak was born. Savalas polished his hard-boiled image to a brilliant sheen over the long run of Kojak (CBS, 1973-1978). During those years, he co-bought racehorse Telly's Pop, recorded many albums, including "Telly" (1974) and "Who Loves Ya, Baby" (1976) and directed and wrote the film Beyond Reason (1977). After the very popular series ended, Savalas reprised the Kojak persona in several Kojak-based TV-movies, furthering his public canonization. One of Savalas' brothers, George Savalas (known professionally for a time simply as 'Demosthenes') played the character 'Stavros', a sensitive , wild-haired, quiet, comedic foil to Kojak's street-wise humor in an otherwise dark dramatic TV series.

Throughout his life, Telly Savalas was a charismatic leader, creative writer, director, and producer. He won the Emmy, the Peabody, and Golden Globe Awards. In 1990, the city of New York declared "The Marcus-Nelson Murders" as the official movie of New York City, and awarded Telly with the Key to the City. He was also a strong contributor to his Greek Orthodox roots through the Saint Sophia and Saint Nicholas cathedrals in Los Angeles and was the sponsor of bringing electricity in the '70's to his ancestral home, Yeraka, Laconia, Greece. His mother, Christina, was a world recognized contemporary of Picasso, and he himself released several records, the most remembered was his version of "If", that was #1 in Europe for 10 weeks in 1975.

Many people do not know that Telly was a world-class poker player, degreed in psychology; a motorcycle racer, and lifeguard. He appeared in over 80 movies. In his capacity as Producer for "Kojak", he gave many stars their first break, as Burt Lancaster did for him. He was considered by those who knew him a generous, graceful, compassionate man.

Prior to being a successful movie star on the big screen, Savalas became one of the most charismatic and beloved character actors of all time during the late 1950s and the 1960s, where he made his very first guest-starring role on an episode of Armstrong Circle Theater, in fact, he appeared on the show, twice. He also made 54 more guest-appearances between 1959 - 1967 in most of these shows, Naked City, King of Diamonds, The Aquanauts, The Untouchables, Burke's Law, The Fugitive, Bonanza, The Man from U.N.C.L.E., The F.B.I., among many others. He also had a recurring role as Brother Hendrickson on the popular crime drama series, 77 Sunset Strip, as his career already launched.

On the cover of Newsweek magazine as Kojak

Undoubtedly Savalas' most famous role was that of the tough detective Kojak on television. Lt. Theo Kojak was a bald New York City detective who had a fondness for lollipops and whose trademark line was, "Who loves ya, baby?" Reportedly the lollipop gimmick was added in lieu of having the character smoke, a habit that fell out of vogue among TV series in the 1970s. He was nominated for an Emmy Award for Outstanding Lead Actor in a Drama series, two years in a row, but won the Emmy in 1974. He was also nominated for Golden Globes, four times in a year, and won between 1975 and 1976. In 1974, prior to starring on Kojak, he also became a singer. In 1978, after a 5 season run on the air, CBS has decided to cancel the show due to low ratings.

Telly's brother George played the recurring role of Detective Stavros. Newcomer from the Jackson Heights, Queens, Kevin Dobson, played the role of Kojak's trusted partner, Det. Bobby Crocker, and would be capable of helping out bad guys in and on the scene with Savalas. The on-screen chemistry of both Savalas & Dobson would become a instant success of the 1970s, and had the best relationship together, especially when the show was cancelled. For most of the 16 years (after Kojak), Telly's co-star (Kevin Dobson) have been keeping the actor in touch prior to Dobson starring in a short-lived series in 1981, just before he gained famed in a prime time 1980s, soap opera, Knots Landing, the following year, and before Savalas's own death. Soon, both Savalas & Dobson would later be reunited for one last time in the 1990 movie Kojak: It's Always Something where Kevin's character played a lawyer, instead of a police officer. 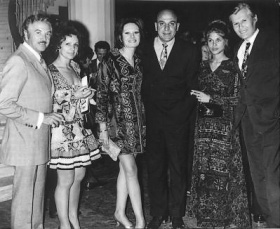 Telly Savalas with wife Sally Adams to his left, and Rika Dialyna to his right

Savalas was married 3 times. In 1948, he married his college sweetheart, Katherine Nicolaides, right after his father's death from bladder cancer. They produced a daughter, Christina (named after his mother), (born 1950). After Katherine had found out from Telly that he was fleeing from debtors, she filed a divorce from Savalas in 1957 and urged him to move back to his parents' house, that same year. While Savalas was going broke, he founded the Garden City Theater Center in his native Garden City, New York, area. When he was working with future actors, Marilyn Gardner, a theater teacher, met and fell in love with Savalas, and the couple got married in 1960. The following year, she gave birth to a daughter, Candace (born 1961) and to Penelope in 1963.

In 1969, when working on the movie On Her Majesty's Secret Service, Savalas had to make a choice between the family he loved or another woman, (Sally Adams), he left his family behind him. He met Adams in England while on vacation starring in that movie, and just several years later, after she gave birth to Nick (born 1973), Gardner filed a divorced from Savalas in 1974. His stepdaughter, (Adams' daughter, Nicollette Sheridan of Knots Landing and Desperate Housewives fame, born November 21, 1963) is an actress, and his goddaughter, (Jennifer Aniston of Friends fame, born February 11, 1969), is also an actress.

In 1977, he met Julie Hovland, who was a travel agent from Minnesota, on his last working days of Kojak and the 2 started dating. By the time he got to be 60, he married her, and had 2 more kids, Christian & Ariana.

Relatives's death and his own last days

After Savalas came back to reprise his role on Kojak in the 1980s, he started losing close relatives. George Savalas, his brother died in 1985 of leukemia; he was 58. And 4 years later, Christina, his mother who had always been his best friend, a supporter, and a devoted parent, died in 1989. Later that year, Savalas was diagnosed with prostate cancer. He refused to see a doctor until 1993, when he didn't have much time to live. While fighting for his life , he continued to star in many roles, including a recurring role on The Commish. On January 21, 1994, Savalas celebrated his 70th (and last) birthday, surrounded by his family and his friends. The following day, on January 22, 1994, Savalas died of complications of prostate cancer at the Sheraton-Universal Hotel in Universal City, California. He was interred at the George Washington section of Forest Lawn Memorial Park in Los Angeles, California.