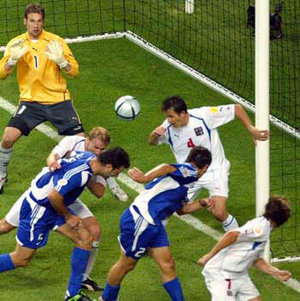 Traianos Dellas (Τραϊανός Δέλλας) (born January 31, 1976 in Thessaloniki) is a retired Greek football player - a towering, strong defender (his nickname is "Collosus") who has played for the Greek National Football Team and AEK Athens.

Dellas had an exceptional tournament at Euro 2004 partnering Michalis Kapsis in the centre of what became an almost unpenetratable Greek defence, leading to his being voted onto the tournament All-star Squad. He scored the goal that put Greece in the final of the tournament, a "silver goal" in the last minute of the first half of extra time against the Czech Republic. (Strictly speaking, this was the only silver goal ever scored, all other silver goals having been scored in the second half of extra time and thus not forcing the game to end sooner than it otherwise would have done). At the end, this goal was the only one he ever scored for the Greek National Football Team in 53 caps.

Dellas got his start with Greek side Aris (1994 - 1997) before a loan spell with Panserraikos was followed by a largely unsuccessful two-year stint with English outfit Sheffield United. He returned to Greece with AEK Athens, for two seasons, before securing a transfer to Perugia FC of Italy, where his spectacular defensive performances and technical ability earned him a transfer to AS Roma in 2002.

Following the move of Roma coach Fabio Capello to Juventus, Dellas established himself as a starter. His play was outstanding. In fact, he earned the peculiar honor of being one of only three players - playmaker Francesco Totti and striker Vincenzo Montella being the others - who were not consistently booed by the fans during training and games in Roma's disastrous 2004 and 2005 seasons. After failing to renew his contract with the club, Dellas became a free agent. Wary of the player's form and fitness, he missed nearly 8 months of football due to back and hernia injuries, and thus, expected offers from the big clubs of Europe, including English side Tottenham, failed to materialize.

Summer of 2005, he signed a contract with old-club AEK Athens rejoining his former teammate, club president Demis Nikolaidis and previous coach Fernando Santos. He had 53 appearances for the Athens outfit and captained the club. On July 23, 2008, AEK Athens officially confirmed the departure of colossus defender Traianos Dellas from the club, after the tall centre-back agreed to a mutual termination of his contract.

On July 24, 2008, a day after he was released by AEK, Cyprus champions Anorthosis Famagusta signed Traianos Dellas to a two-year contract. He was released in March 2010.