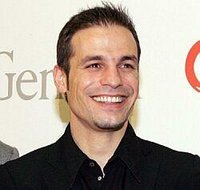 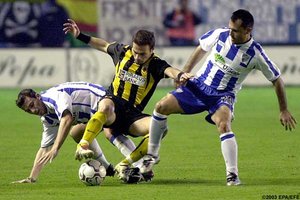 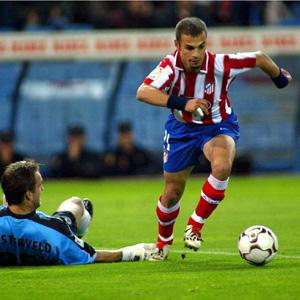 Born September 17, 1973, Demis (short for Themistoklis) Nikolaidis was a member of the AEK Athens FC fan club as a youngster and while he was making a good impression with Apollon Athens FC between 1994 and 1996 - scoring 33 goals in 62 starts - he turned down a move to Olympiacos CFP, declaring that the only club he would depart for was AEK, whose emblem was tattooed on his left arm.

On March 24, 2002, the The International Committee for Fair Play awarded the AEK FC player with the Fair Play Award, an honorary diploma for his conduct in the Greek Football Cup Final on May 8, 2000, between the teams of AEK and Ionikos, when Mr. Nikolaidis informed the referee he had used his hand to score a goal that had been allowed as valid.

In summer 2003 he ended his love affair with AEK - where he scored 125 Alpha Ethniki goals in 189 games - to try his hand in Spain, signing a one-year contract with Club Atlético de Madrid.

In 2003-2004 he scored six goals in 22 Primera División fixtures before leading a consortium which completed a takeover of his former club AEK.

Even though struggling with injury, Rehhagel nevertheless included him in his Euro 2004 squad. Greece's new strike force, Zisis Vryzas and Angelos Charisteas, played well enough but Nikolaidis still figured consistently in the team, coming off the bench in all three group games before starting against France, against whom he was desperately unlucky not to score, and leading Greece to a tremendous shock victory. After that fine performance, however, Nikolaidis at last succumbed to a serious injury and did not even dress for Greece's last two games. Without a doubt, he accomplished much during his international career but there are some who wonder if his contribution could not have been greater had an injury and a poor run of luck not conspired against him.

He retired from his role as a football player right after Euro 2004. He scored 17 goals for the Greek National Football Team in 54 caps.

A return to AEK

With AEK struggling terribly in the wake of Chrysostomos Psomiadis' corruption and the prospect of relegation to the fourth division looming, Nikolaidis shocked the football world by retiring at the relatively tender age of 31. His next move, even more surprisingly, was to establish a consortium of businessmen and purchase AEK, as he had always dreamed. Becoming the club's president, Nikolaidis, and technical director, Ilija Ivic, a former teammate, made several astute signings and fought ferociously for the league title, finishing third when many had expected a mid-table performance. This year, after signing several current Greece Under-21 players, as well as adding former star Vasilis Lakis, Ukrainian international striker Oleg Venglinsky and onetime Inter centreback Bruno Cirillo, many pundits and fans expect Champions league qualification or even a title run. Apart from the improvement of the economic standards and the athletic performance of AEK, Demis Nikolaidis appeares determined to stamp out fan violence at his club. Immediately after assuming the role of club boss, Nikolaidis said he would not tolerate any misbehavior from AEK fans. Nikolaidis has expressed unbending support for trouble-free Greek soccer that, ultimately, will be open to all interested spectators, including families.

On August 22, 2008, Demis decided that he would step down as chairman of AEK in May, 2009 stating that he had achieved his goal in the 5 year plan, one of the reasons according to Demis for stepping down was that he didnt sell 30,000 season tickets, he said "If I had managed to convince the AEK supporters to come to the stadium then I would not be leaving. In my mind we need 30,000 to become a big team".

On November 2, 2008 Demis Nikolaidis announced he was resigning from his post as president of AEK, shortly after his team beat Asteras Tripoli 2-1 at home with a goal scored in injury time. He focused on the jeering he experienced from AEK's supporters, and explained his decision by saying that he did not wish to be president of a team where such situations occurred. "I wasn't expecting those reactions from the crowd." Nikolaidis said[1]. "I don't want to be the president of a club where the fans demonstrate against the team. This is my last day as the president of AEK. I don't have anything else to offer to the club. My decision is final."