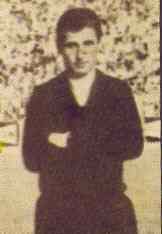 Vangelis Petrakis was a Greek football goalkeeper in the 1960s era.

Petrakis played for Aris Thessaloniki when he transferred to AEK in their league-winning season of 1963. During most of his career with AEK, he lived in the shadow of regular goalkeeper Stelios Serafeidis. Unfortunately for AEK fans, his name was associated with some heavy defeats including:

Eventually, he returned to Aris and also played in the early 1970s for OFI Crete.

As a member of the Greek Fire Service, he played for many years in the Greek military team.