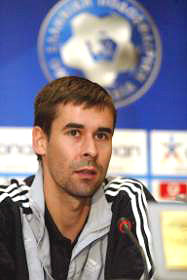 Vasilis Tsiartas (alt. spelling: Tsartas), nicknamed El Mago, has been labelled by many as perhaps one of the most naturally talented Greek footballers of his generation. Tsiartas was born on November 12th, 1972 in Alexandria, Greece and currently resides in Athens. As a player he was famed for his almost lackluster and slow movement on the ball, however his ability was never in question and was in many ways the definition of a player who wears the number 10. Tsiartas was predominantly left footed but was just as dangerous with his right. He was a free kick specialist and also took penalties for the National Football Team of Greece and his club sides. He was an important part of the Greek National Side that qualified for Euro 2004 and later would go on to win the tournament as 100-1 outsiders.

He began his career at the academy at AE Alexandrias and later the team of FAS Naoussa FC which also produced such players as Yiotis Tsalouchidis and Dimitris Markos. The left footed attacking midfielder soon made a name for himself and subsequently moved to AEK FC. He became top scorer in the 1996 season in the Alpha Ethniki. This and his huge attacking presence led to a move to Sevilla FC where he was an infuential captain and vital in the team gaining promotion to the Primera Division. He was known in Sevilla as 'El Mago' due to his lethal ability with any free kicks combined with a powerful shot in or outside the box. He returned to AEK in 2000 and, after another successful 4 year spell, played for a year with at FC Köln in Germany. Negotiations to sign with PAOK fell through in 2006. On October 2006, Ethnikos Piraeus signed Tsiartas until the end of the season for 150,000 Euro.

Throughout his career, and up until he joined Ethnikos, Tsiartas had played a total of 414 football games, and scored 136 goals.

He retired from football on February 14, 2007. "I walk away with my head held high," an emotional Tsiartas said in his press conference. "We have to accept that the end does come at some point. I have been true, sincere, but most of all honest. I could have accomplished more in my career, but I am not ungrateful. I would have liked to have ended my career playing for a team." He also cited Vasilis Hadjipanagis as his role model. 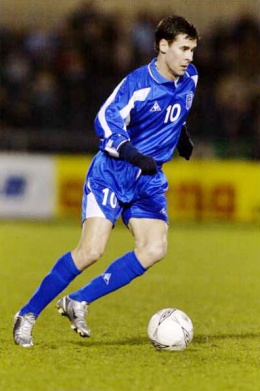 Having played U-16 and U-21 he debuted for the Greek National Team in 1994 against Saudi Arabia. He managed a total of 12 goals in his 70 caps with the National Team including an important penalty against Northern Ireland in 2003 which led to Greece qualifying for Euro 2004. He was used as a sub in Euro 2004 and managed to claim two vital assists, one against Spain and the other against the Czech Republic on the way to Greece's victory.