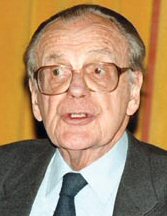 Yiangos Pesmazoglou, was a veteran politician and economist, who headed negotiations that led to Greece signing an association agreement with the then European Economic Community.

He served as finance minister in the first government of Constantine Karamanlis after the fall of the military dictatorship in 1974. He was an MP in the European Parliament from 1981 to 1984 while heading the Party of Democratic Socialism (KODISO) and was president of the Athens Academy in 1996.