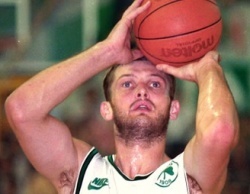 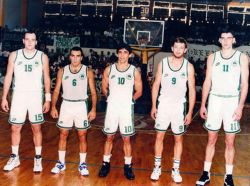 Žarko Paspalj began his pro career in the mid-1980s with Budućnost, back then a small, unambitious side that mostly served as talent feeder for bigger clubs like Partizan, Cibona, Jugoplastika, Red Star or even Bosna.

Constantly in danger of relegation, Buducnost sometimes banked on more than just its own quality for top-league survival. There is an unconfirmed story from the early 1980s when Paspalj was a junior, about Cibona coming to Titograd for a late season game which was meaningless for Zagreb side but crucial for Buducnost's hopes of remaining in top division. The story goes that a deal was struck between 2 sides to allow the home team to win, while in return Cibona people got to watch Buducnost's juniors practice and take whichever player they liked back to Zagreb. Knowing Paspalj was by far their best young prospect and an asset that would soon be worth a lot of money, Buducnost leadership wouldn't let him train for a few days which meant that Cibona never saw him and picked another player.

Not too long after that, Paspalj entered the senior squad, contributing greatly to Buducnost's third place finish in 1985/86 season and a playoff semi-final where they lost to eventual champions KK Zadar.

During summer of 1986 Buducnost sold Paspalj to Partizan Belgrade. Vlade Divac, another future star, also joined the club that summer from Sloga Kraljevo. Together with young Sasha Djordjevic and more established players like Milenko Savović and Goran Grbović, they won the national title in a final against Red Star Belgrade. Paspalj played well enough to earn a spot on the national team of Yugoslavia that reached the semi-finals of the 1987 European Championships in Athens, Greece. The following year, in 1988, he played a leading role in the side that made it to Olympic final against the Soviet Union, and marked himself out as a potential star with some fine performances for Partizan at the McDonalds Open.

In 1989 Paspalj became one of the first Europeans to move to the NBA, joining the San Antonio Spurs. However his move was not a success and he featured in only 28 games, scoring a total of 72 points (2.6 ppg) in 181 minutes of action. His attitude towards the NBA revealed much about the 'American dream' and its impact on the Eastern Bloc mentality: 'My goal is to earn enough money to open a Pizza Hut in Belgrade.' However, knowing Paspalj's nature, the statement could have very well been delivered in jest.

Back in Partizan for a season

In 1990 Paspalj returned to Yugoslavia and to Partizan. There he became league's top-scorer and led the team with Djordjevic and Danilovic to another Yugoslav playoff final but even Radja-less KK Split (Pop 84) team was too much. Nonetheless, the overall season performance earned Paspalj a high-profile transfer to Greek club Olympiakos in the summer of 1991.

In 1991/92 Paspalj almost single-handedly inspired Olympiakos, a team that finished in 8th place in Greek league the previous year, to the play-off finals against PAOK from Thessaloniki. Paspalj scored an average of 32 points per game and was named the league MVP. However PAOK defeated Olympiakos for the title, and Paspalj was denied the chance to participate in the 1992 Olympic Games in Barcelona due to the sanctions imposed on FR Yugoslavia.

In his second season at Olympiakos, 1992/93, Paspalj benefited from a strengthened team and Olympiakos won the Greek Championship, defeating arch-rivals Panathinaikos in a controversial final series. Paspalj scored an average of 25 points per game but he effectively cost his team a place in the Euroleague Final Four when he stepped over the line in the dying seconds of the crucial play-off match against CSP Limoges of France.

The 1993/94 season saw Olympiakos crowned League and Cup double champions in Greece. However Paspalj's shooting statistics deteriorated alarmingly during the year as he became a far more erratic player, capable of only scoring in bursts or not at all. In particular his free-throw percentage nose-dived from 86% to under 50% and this led to a traumatic experience at the Euroleague Final Four in Tel Aviv in April 1994, when Paspalj missed a crucial free throw with four seconds left as Olympiakos suffered a shock defeat in the final, 59-57 to Joventut Badalona. Paspalj ended the game with 15 points with 3 of 10 free-throw shooting, and later admitted to Greek television that he knew before he took a shot that he would miss. This mental block would plague Paspalj for the remainder of his career. It transformed one of the European game's finest shooters into a centre-forward who relied on his experience, guile and skill on the fast break to penetrate opposing defences. 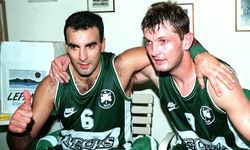 In August 1994 Paspalj caused a sensation by transferring to bitter Athenian rivals Panathinaikos. Relations between Paspalj and the Olympiakos leadership had deteriorated during the summer and his departure to their arch-rivals infuriated Olympiakos fans who subsequently turned on Paspalj and hounded him whenever the two teams met. This initially inspired Paspalj, and in October 1994, in his first appearance against Olympiakos, he memorably began the game with three consecutive 3-pointers in the opening minute.

However the move couldn't hide the flaws in Paspalj's game and his shot continued to deteriorate. He was the top-scorer for his new team with 19 points per game but failed to lift them beyond second place in the Greek League and the semi-finals of the Euroleague, when in both cases Panathinaikos was defeated by Olympiakos, which made even the Panathinaikos fans disillusioned with him.

This was evident during the 1995 European Basketball Championships held in Athens, when fans of both clubs jeered him, although a huge chunk of their dissatisfaction could be attributed to Paspalj being the captain of the powerhouse Yugoslav squad that just ended Greek hopes of winning the title on home soil in an emotionally charged semi-final. Lifting that trophy in front of the Athens crowd served as huge vindication and confidence boost for Paspalj after a couple of tough seasons.

Paspalj moved on in late summer of 1995 and began the new season with Panionios, also of Athens. This was a smaller club that had regularly over-achieved, and it had the good fortune of being led by the great Dusan Ivkovic who knew Paspalj well from coaching him in the national team. Ivkovic became a father-figure to Paspalj and improved his self-confidence and his general game, and Paspalj inspired Panionios to third place in the league with a series of fine performances indicating that after two lean years he was nearing his peak once more.

'96 Olympics, another shot at NBA, and France

This became evident in the 1996 Olympic Games in Atlanta, when 30-year-old Paspalj scored 16 points in the first half of the final against the Dream Team. He faded in the second half along with entire Yugoslavia team but still ended up a top scorer with 19 points, leaving a good impression that prompted Atlanta Hawks to invite him to pre-season training camp. Unfortunatelly this return to the NBA fell through after revelations of an extra-marital affair with a woman in Athens affected Paspalj's game, and he spent the 1996/97 season in Paris, playing for PSG Racing Basket and leading the team to its first national title after 43 years.

Back to Greece: Aris Thessaloniki

Paspalj returned to Greece, his second home, for the 1997/98 season and signed for Aris Thessaloniki. This grand old club, the emperor of Greek basketball throughout the 1980s, had fallen on hard times, and was about to embark on one of the most difficult seasons of its history. In February 1998 Paspalj led his team to victory in the Greek Cup but the majority of his team-mates left the club the following day after having gone without payment for some time. Paspalj remained, but an injury meant that he did not play again that season as Aris alarmingly dropped down the table and narrowly avoided relegation to the A2 league.

One last hooray in Bologna

In the summer of 1998 Paspalj secured a move to the newly-crowned European champions, Virtus (Kinder) Bologna. However, effects of past injuries and years of chain-smoking caught up with him and he was cut from the team in December after a series of undistinguished performances. The tragedy for basketball was that a player of his calibre was lost to the sport at the age of 32, but for Paspalj himself a personal near-tragedy was still to come.

Summing up his 14 and a half seasons in professional basketball, Paspalj is remembered for a successful globetrotting career that included a multitude of trophies and individual awards. Perhaps the single most memorable aspect of his game is the off-balance, unorthodox sling-style shooting technique he perfected - a move that served him so well in the first part of his career, but deserted him later on.

He'll also stay in fans' hearts and minds for his affable, folksy nature, which prevented him from ever taking basketball too seriously. And he often didn't really need to, with an enormous amount of natural talent to fall back on. It's no secret Paspalj led a notoriously unhealthy and undisciplined lifestyle that effected his play considerably and ultimately shortened his career, but there's no room for regrets, either, considering the impressive achievements.

Paspalj also participated in Euroleague Final Fours on three occasions with three different teams. In 1988 he was part of the young Partizan squad that came in third. In 1994, he led Olympiakos to the final but couldn't make the last step. The very next season he was there again, this time with Panathinaikos, but they finished third.

In March 2001 Paspalj suffered a serious heart attack while playing recreational football in Athens, and was hospitalised for several weeks. He suffered a second heart attack in July 2001, but battled to regain his health.

In the fall of 2005, during a discussion on RT of Serbia television regarding coronary issues, he stated that 2 heart attacks weren't enough to force him into quiting smoking or into substantially changing his lifestyle.

Role on the Serbia-Montenegro bench

In early 2004 he became Team Manager for the Serbia-Montenegro national squad, working under Head Coach Zeljko Obradovic. The most important part of Paspalj's job was help creating the right atmosphere by acting as liaison between the coach and the players. Obviously, the thinking was that such a well-liked former player would have a soothing effect on the damaged inter-squad relations. Paspalj was also entrusted with the role of convincing different players, especially ones from the NBA, to come play for the national team.

Unfortunatelly, his time at the post coincided with two of the team's worst performances in recent history as S&M finished 11th (out of 12 squads) at the 2004 Athens Olympics and then failed to reach the quarter-finals of the 2005 European Championships, held on home ground in Belgrade.

Paspalj also decided to try his hand at business by investing heavily in the ambitious Aqua Park project in New Belgrade's Blok 44. The construction started in fall 2005 and the project is still ongoing at a huge site near Sava river.

Initial projection of a summer 2006 opening turned out to be too optimistic, so, according to Paspalj, the new target for grand opening is the summer of 2007.

Paspalj got married as a 20-year-old in 1986, soon after he moved to Belgrade to play for KK Partizan. He and his wife Milka have two daughters: Stasa born in 1987, and Sanja born in 1995.