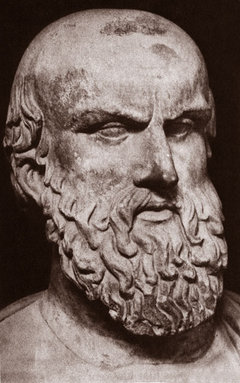 Aeschylus, the Father of Tragedy

The "Father of Tragedy," Aeschylus was born in 525 B.C. in the city of Eleusis. Immersed early in the mystic rites of the city and in the worship of the Mother and Earth goddess Demeter, he was once sent as a child to watch grapes ripening in the countryside. According to Aeschylus, when he dozed off, Dionysus appeared to him in a dream and ordered him to write tragedies. The obedient young Aeschylus began a tragedy the next morning and "succeeded very easily."

When Aeschylus first began writing, the theatre had only just begun to evolve. Plays were little more than animated oratorios or choral poetry supplemented with expressive dance. A chorus danced and exchanged dialogue with a single actor who portrayed one or more characters primarily by the use of masks. Most of the action took place in the circular dancing area or "orchestra" which still remained from the old days when drama had been nothing more than a circular dance around a sacred object.

It was a huge leap for drama when Aeschylus introduced the second actor. He also attempted to involve the chorus directly in the action of the play. In Agamemnon, the chorus of Elders quarrels with the queen's lover, and in The Eumenides, a chorus of Furies pursue the grief-stricken Orestes. Aeschylus directed many of his own productions, and according to ancient critics, he is said to have brought the Furies onstage in so realistic a manner that women miscarried in the audience.

Although Aeschylus is said to have written over ninety plays, only seven have survived. His first extant work, The Suppliants, reveals a young Aeschylus still struggling with the problems of choral drama. The tale revolves around the fifty daughers of Danaus who seek refuge in Argos from the attentions of the fifty sons of Aegyptus. His second extant drama, The Persians, recounts the Battle of Salamis--in which Aeschylus and his brother actually fought--and deals primarily with the reception of the news at the imperial court. This play contains the first "ghost scene" of extant drama.

In his third surviving play, Prometheus Bound, Aeschylus tackles the myth of Prometheus, the world's first humanitarian. As the play begins, the titan is being fastened against his will to a peak in the Caucasian mountains for giving mankind the gift of fire without the consent of the gods. Prometheus knows Zeus is destined to fall. In fact, he holds the secret of the Olympian's doom--a certain woman that will be his undoing--but Prometheus will not reveal her name. Even amid the fire from heaven that is hurled at him in a frightening climax, Prometheus remains fearless and silent.

In Seven Against Thebes, Aeschylus deals with themes of patricide and incest. He was not, however, willing to settle for the conventional explanation of the "family curse". Instead, Aeschylus delved deeper, suggesting that heredity is nothing more than a predisposition--that the true cause of such "acts of wickedness" is ambition, greed, and a lack of moral fortitude. Thus, eliminating the gods as an excuse for wickedness, Aeschylus demanded that men take responsibility for their actions.

The Oresteia, a trilogy, was performed in 458 BC, less than two years before Aeschylus' death. Once again, he dealt with the tragedy of a royal house, a "hereditary curse" which began in a dim, legendary world in which Tantalus was cast into the pit of Tartarus for revealing to mankind the secrets of the gods. This situation paralleled events in Aeschylus' own life. He was reportedly charged with "impiety" for revealing the Eleusinian mysteries--the secret rites of the city of his birth--to outsiders. It is likely, however, that these charges were politically motivated, and he was not convicted.

Legend has it that Aeschylus met his death around 456 BC when an eagle mistook his bald head for a rock and dropped a tortoise on it. Whatever the cause of his death, his life laid the groundwork the dramatic arts would need to flourish, and by the time of his death, there were two notable successors ready to take his place--Sophocles and Euripides. In addition, Aeschylus left behind two sons who would carry on his dramatic legacy, and one of them, Euphorion, would even claim first prize at the City Dionysia, defeating both Sophocles and Euripides in 431 BC.