Anaximenes (in Greek: Άναξιμένης) of Miletus (585 BC - 525 BC) was a Greek philosopher from the latter half of the 6th century, probably a younger contemporary of Anaximander, whose pupil or friend he is said to have been. 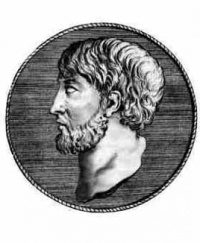 He held that the air, with its variety of contents, its universal presence, its vague associations in popular fancy with the phenomena of life and growth, is the source of all that exists. Everything is air at different degrees of density, and under the influence of heat, which expands, and of cold, which contracts its volume, it gives rise to the several phases of existence. The process is gradual, and takes place in two directions, as heat or cold predominates. In this way was formed a broad disk of earth, floating on the circumambient air. Similar condensations produced the sun and stars; and the flaming state of these bodies is due to the velocity of their motions. He states:

"Just as our soul, being air, holds us together, so do breath and air encompass the whole world."

What makes the three milesic philsophers, Thales, Anaximander and Anaximenes, stand out is that the theoretical human has become a reality. The way of thinking has in its basic form moved away from the mythological thinking (or mythos) and into the domain of the theoretical thinking (or logos). From now on it is about explaining the universal and the general. Everything in the universe can now be approached by the thoughts of humans. This notably influenced the Pythagoreans.