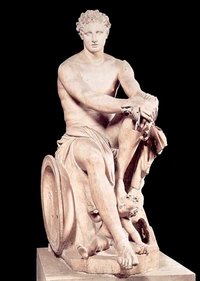 Ares, the God of War

The Greek god of war, son of Zeus and Hera. Ares (Άρης) (Mars in Roman mythology) was one of the 12 principal gods. Ares was a god with little moral aspect - he seems to have been mainly a personification of war.

Little is known about the worship of Ares, who may have been a Thracian god before he was adopted into the Greek Pantheon. His cult was particularly strong among the barbarous and warlike peoples of Thrace and Scythia, but "the maniac, the dunce, the bane of all mankind" apparently did not receive much attention in the more civilized parts of the Greek world. Strangely though, this bitter enemy of Athena had a temple in Athens. Also, a spring was consecrated to him in Thebes.

Ironically, the Greek war god was remarkably inept in single combat against gods, Giants, and mortal heroes alike. Otus and Ephialtes, twin Giants bent on overthrowing the Olympians, captured Ares and bound him in brass chains. The gods of Olympus did not hurry to rescue the detested Ares, and it was thirteen lunar months before Hermes, the fleetest of the gods, was dispatched to free him under cover of night. Ares was also bested by Hephaestus, the lame blacksmith of Olympus, on two occasions.

Fierce and impetuous, Ares had unhappy associations. Disguised as a wild boar, he jealously killed Aphrodite's lover, the beautiful youth Adonis. Ares' children with various mortal women included such violent characters as the Thracian Diomedes and the outlaw Cycnus, both slain by Heracles. Ares and Aphrodite were the parents of Eros and of Harmonia, who become Cadmus' wife.