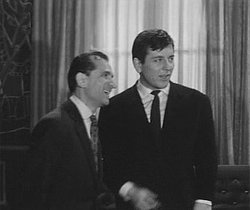 He studied at the Drama School of the Macedonian Conservatory of Thessaloniki and made his stage and screen debut in 1953.

His breakthrough came in 1961, when Yiannis Dalianidis gave him a key part in his phenomenally successful youth melodrama O Katiforos (1961). He soon became one of the best and most popular comic actors of his generation and created personal groups, starring in many Greek comedies by top playwriters and classics like Aristophanes' "Sfikes" (as Philokleon), Molière's "Le bourgeois gentilhomme", etc.

He also starred in about 60 movies, mostly comedies and musicals of the 'golden era" of Greek commercial cinema and received a Lifetime Achievement Award at the Thessaloniki Film Festival in 1984.