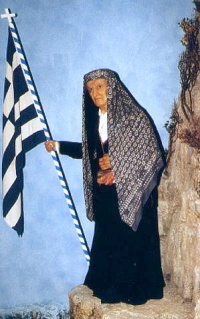 Despina Achladiotou, (Greek: Δέσποινα Αχλαδιώτου) better known as the Lady of Ro was a common island woman who became a Greek folk heroine.

Achladiotou was born in 1889 and for 34 years (1927 - 1961) was the lone inhabitant of Ro, a tiny island in the Dodecanese chain, 3 miles from Kastellorizo. She made it her daily routine to raise the Greek flag over her island, so far from the Greek mainland, so close to Turkey, as a gesture of patriotism and to underline the Greek nature of her isle.

Achladiotou died on May 14, 1982 and was buried with honours. A memorial to her exists on Ro. The Greek state honoured her on a commemorative postage stamp.