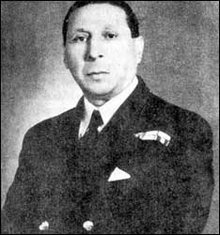 Kalafatis was born in the Exarchia section of Athens in 1890. He graduated from the Health Department of the University of Athens. He distinguished himself in his throwing, jumping and running records, but football was his big passion. So, at the age of 18, and being an athlete of Panellinios GC, he was trying to create a football team. All the big fields in Athens, mainly in the areas of Goudi and Rouf were used as the first football fields of Kalafatis' team. When Panellinios refused to officially create a football department, George Kalafatis established the first team of Panathinaikos, named "Podosfairikos Omilos Athinon" (P.O.A.) at the time. It was February of 1908. Apart from G. Kalafatis, other establishing members of POA were: his brother Alexandros who had been the first president, Dimitris Doukakis, Periklis Bouboulis, Emmanouil Chrisis (vice-president), V. Granitsas, Mich. Mantzakos, Papageorgiou, L. Gaetas, Demertzis, I. Stavropoulos, Paschos, Nik. Misakian, Reppas, Sapounias, Garoufalias.