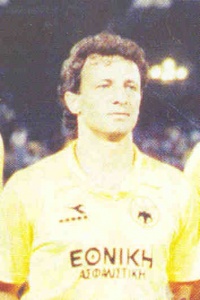 Savvidis was born on February 8, 1961 in Lefkosia, Cyprus. He played as a midfielder, starting his career with Olympiakos Nicosia. He made his debut for Omonia Lefkosia in 1981. His fine play earned him a transfer to AEK Athens, in the Greek Alpha Ethniki, after the 1987 season. At the time, he was considered the best footballer in Cyprus.

Savvidis was part of the AEK club that won the championship in 1989 and 1991. He returned to Cyprus and Omonia after the 1992 season and continued his playing career until 1996.

During his career, Savvidis was capped 46 times by the Cyprus National Football Team, scoring two goals.

After his playing days were over, Savvidis coached Digenis Morfou, winning first place in the Cyprus Football B Division and achieving promotion for the club after almost 30 years.

He left Digenis to pursue a career as assistant manager to former AEK teammate Toni Savevski: 2001-02 with Apollon Limassol and between 2002-2004 with Omonia. In late November, 2007, he was named head coach of Omonia, a position he held until March 2008.