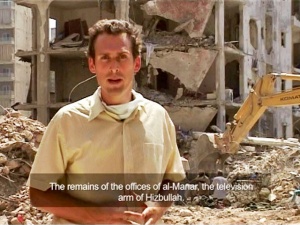 Iason Athanasiadis is a writer, photographer, political analyst, and television producer who has contributed to a range of media, including the BBC, al-Jazeera, Channel 4[1], and specializes in the Middle East. Iason was born in Athens, in 1979, to a British father (Georgios Fowden) and a Greek mother (Polymnia Athanasiadi) and his full name is Athanasiadis-Fowden.

Athanasiadis is based in Istanbul. He is fluent in Arabic and Farsi and has been a regular visitor to Tehran over the past decade.

A graduate of Oxford University[2], Iason has written for the Christian Science Monitor, the Financial Times, the International Herald Tribune, the Sunday Telegraph, The Guardian, the Toronto Star, the Washington Times, and Australia's leading current affairs magazine The Diplomat.[3] He studied Arabic and Modern Middle Eastern Studies at Oxford University (BA, 2:1) as well as Persian and Contemporary Iranian Studies at Tehran's School of International Studies (MA).

He was a Fellow at the Nieman Foundation for Journalism at Harvard University from 2007 to 2008.[4]. He is an Aristotle Onassis Foundation scholar.

He spent a year living in Damascus, then another year in Cairo, getting a taste of two of the Arab World's great cultural and political capitals. In addition, he lived for four months in Qatar, a rapidly-developing emirate on the Persian Gulf. A year's break in Athens in 2003-04 allowed him to work for BBC World during the buildup to the Olympics as well as produce a travel program for Greek TV. In addition, he covered Turkey and Cyprus for several newspapers.

After the Olympics, he moved to Tehran and the biggest developing story in the Middle East. During this time, trips to Afghanistan and Iraq broadened his understanding of the region and its unreported dynamics.

He was arrested in Tehran on June 20 2009 after being charged with 'illegal activities' in the course of his reporting on the disputed Iranian elections. No details of his alleged crime were released.

Some articles by Iason Athanasiadis