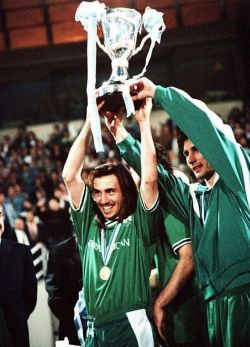 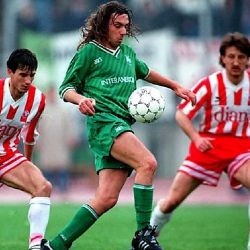 Juan José Borrelli (born November 8 1970 in San Isidro, Buenos Aires Province) is a former Argentinian footballer, one of the best known Argentinian footballers that have played in Greece. Borrelli begun his career in the late 80's in River Plate. Soon, Greek champions Panathinaikos FC brought him (1991) as the new leader of the team. Although during the first two seasons in the team, Borrelli couldn't show his great potential, mainly because he was homesick, he gradually transformed into a leader in the field and helped Panathinaikos FC to win the 1995 championship. His contribution was even greater in the 1996 season when he scored 15 goals in the championship and 4 in Champions League, leading his team to the domestic double and the UEFA Champions League semifinals.

As a result, he attracted the attention of scouters from many European teams and in 1997 he was sold to Real Oviedo but the team was relegated and in the end of the season he returned to Argentina (River Plate and San Lorenzo). In the 2001 season he played for the Argentinian side Tigre FC. The following season Borrelli played for a team in Uruguay called Deportivo Maldonado and in the winter he returned to Greece and Akratitos FC. During the summer, Juan Jose Borrelli announced his retirement.

Two years after his retirement (2004), Borrelli was signed by River Plate as Youth Team head coach.