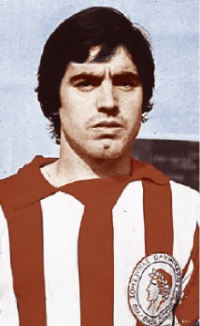 Julio Losada or Julio Losanta was a football player for Olympiakos in the 70s. He was born in Uruguay on June 16, 1950. While a relatively "small" player (162 cm, 65 kg) he was exceptionally fast and dangerous when attacking the opponent.

He joined Olympiakos in 1972, after Nikos Goulandris became president. He went on to play 150 games with Olympiakos and win 5 championship titles.