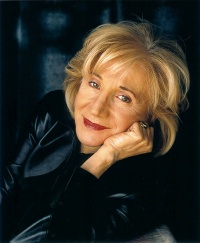 Olympia Dukakis (born June 20, 1931 in Lowell, Massachusetts) was an Academy Award-winning Greek-American actress. The daughter of Greek immigrants to the United States, she was educated at Boston University.

Olympia Dukakis starred in many American movies, including Steel Magnolias, Mr. Holland's Opus, The Thing About My Folks, and Moonstruck (for which she won an Oscar for Best Supporting Actress). Her theater, film, and television work has also led her to win Obie awards, a Los Angeles Critics Award, and a Golden Globe award. She also played the role of Anna Madrigal in the television Tales of the City productions. Much of Dukakis' talent comes in sharp comic timing, which she has put to good use as sarcastic but wise motherly figures to the lead characters such as Moonstruck and Mr. Holland's Opus.

She was cousin to Michael Dukakis, the former governor of Massachusetts who was the 1988 candidate for U.S. president from the Democratic Party. She was married to actor Louis Zorich, who died in 2018. They raised three children.