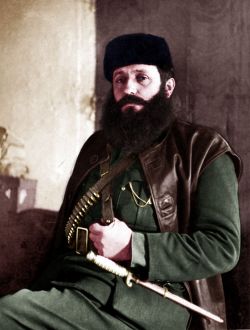 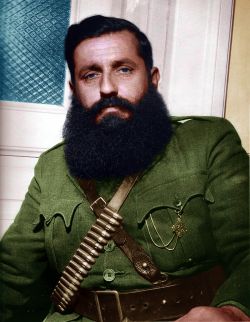 During World War II he served as an artillery corporal of the Greek army in the Albanian front (1940-1941) against Mussolini's army until the Nazi invasion and Greek surrender (April 1941).

After Germany attacked the Soviet Union, Klaras was sent to Central Greece (Roumeli) by the Communist Party in order to assess the capacity of the development of a guerrilla movement against the Nazis. His proposals were adopted by the party and consequently in January 1942 Klaras moved to the mountains in order to start setting up the guerrilla groups.

The first appearance of the partisans organized by Klaras was on the 7th of June 1942 in the village of Domnista (Evritania) in Central Greece. This was also the first time that he appeared under the alias Aris Velouchiotis. From this time on, he rose to prominence in the ELAS ("Greek Popular Liberation Army") forces, which he headed along with Stephanos Sarafis.

One of the most important operations of the Greek resistance movement, in which Velouchiotis and his fighters participated, in cooperation with Napoleon Zervas' republican/monarchist EDES resistance forces and British saboteurs, was the blasting of the Gorgopotamos bridge in Lamia (November 1942). Their success disrupted the replenishment of Rommel's German forces in Africa for several days, as the latter took place by means of the Thessaloniki-Athens railroad.

This was to be, however, the last operation to pit the communist-dominated ELAS organization on the same front with Greek Republican resistance forces, who favoured a return to constitutional parliamentary monarchy, as opposed to the communists' aspiration of imposing a communist regime in Greece.

In October 1944 the Nazis evacuated Greece and the government in exile was reinstated under Georgios Papandreou. EAM-ELAS - by then the most powerful guerrila force in Greece - resisted, attacking EDES, the British and the government forces. When the Varkiza Agreement was signed to end clashes between EAM-ELAS communist insurgents and governmental forces, Velouchiotis vehemently refused to comply and collided with the Communist Party of Greece (KKE) leadership, which then accused him of Trotskyism and treachery, referencing his 1939 statement of renouncement and removing him from the party's member list.

Velouchiotis moved again towards the mountains of Central Greece, in order to start an insurgency against the legitimate Greek Government and the British allies who supported them. Though most of his associates abandoned him, he continued to conduct guerilla war until, in June 1945, he fell into an ambush by Greek Army forces and died, along with his deputy-commander Tzavellas, by blowing himself up with a hand grenade. Government soldiers proceeded to cut his head off and put it on display in Lamia by hanging it on a lamppost, allowing citizens to do anything they wanted to it, in the same manner that Mussolini's corpse had been desecrated.

Aris Velouchiotis remains one of the most controversial figures of modern Greek history. He is considered by some to be one of the symbols of Greek resistance against Germans. Leftists lionized Aris as a hero of the communist cause and have made him the subject of a personality cult comparable only to those of Ernesto Che Guevara, Stalin and Mao Ze Dong.

On the other hand, however, part of the Greek public see Aris as the perpetrator of brutal mass atrocities against defenseless rural populations perceived as negative to their "socialist cause", attacks against non-communist Greek resistance forces, and insurgency against the installed government after Greece had been liberated from the Nazis.