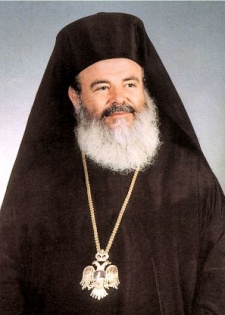 His Beatitude Christodoulos (born Christos Paraskevaides, Greek: Χρήστος Παρασκευαΐδης), was a cleric who rose to Archbishop of Athens and all of Greece.

Christodoulos was born in Xanthi, Thrace on January 16, 1939. He was one of two sons of a food importer. Despite an apparent fascination with the church as a child first in Xanthi and then in the crowded Athens neighborhood of Kypseli, Christodoulos actually studied law. In 1962 he graduated from the School of Law and in 1967 from the School of Theology. In 1961, he was ordained deacon and, in 1965 priest. He served as a preacher and senior spiritual father at the church of Assumption of the Virgin Mary at Palaio Phalero for nine years, and, for seven years he served as a Secretary of the Holy Synod (1967-1974). He took part in many religious missions abroad. He was a Doctor of Theology, he had a degree in French and English, and he also spoke Italian and German. He was the author of many scientific and constructive books. He had been writing articles in religious press and in dailies. He was elected Metropolitan of Demetrias in 1974, with his base in Volos, Thessaly, and Archbishop of Athens and all Greece in 1998. Since his elevation, he had attracted a significant amount of controversy, culminating in a major corruption scandal in 2005.

Christodoulos, at 59 years of age, had been the youngest archbishop to head the Greek Church. He was the first cleric to be democratically elected to the post by the Holy Synod. His chief rivals in ballot were Bishop of Alexandroupolis Anthimos and Bishop of Thebes Ieronymos. He announced his intention to be a reformer and promised to modernise the Church as well as improving relations with other Orthodox groupings. He criticised the growth of racism and discrimination against religious minorities in Greece, but was in turn criticised for his strongly nationalist stance on Greek Catholics, Jews, Muslims and other religious minorities [1].

The archbishop played a leading role in stoking public opposition to NATO and the Kosovo War of 1999 in which Greece, as a NATO member, played a significant (though largely non-interventionist) role. He also spoke out strongly against the European Union and the government's intention to follow EU directives even where they clashed with what he regarded as traditional Greek policies.

[2] This led to a major clash between church and state in 2000, when the Greek government sought to follow an EU directive by removing the "Religion" field from the national ID cards carried by Greek citizens. Christodoulos opposed the decision, claiming that it had been "put forward by neo-intellectuals who want to attack us like rabid dogs and tear at our flesh". [3] He organised two demonstrations in Athens and Thessaloniki, alongside a majority of bishops of the Church of Greece. In 2001, Christodoulos prompted international criticism after claiming that the EU directive had been instigated by Jews. [4]

It emerged the same year that despite Christodoulos' claims that he had no knowledge of or involvement with the Greek military junta of 1967-1974, he had been recorded on film and photographed swearing in the new regime while acting in the role of Secretary of the Iera Sinodos (Ιερά Σύνοδος), the Council of the Greek Orthodox Church. [5]

Despite earlier criticism of the Roman Catholic Church, Christodoulos consented in 2001 to the Greek government's decision to allow Pope John Paul II to visit Greece. He commented that he would not "close the door" on the Pope, because he was coming to the country as a pilgrim. The two men met for discussions during the Papal visit in May 2001, though they did not pray together. Christodoulos' decision led to major controversy in Greece, where many Orthodox Christians regard the Pope (and the Catholic Church as a whole) as a schismatic heretic. [6] He also consented in 2002 to the construction of a mosque in Athens, to end the anomalous situation of the Greek capital being the only EU capital without a Muslim place of worship. [7]

Christodoulos had supported views on Greek politics and culture, that had been criticized as highly conservative and nationalist. He led protests in 2002 against Greece's version of the television programme Big Brother, urging followers to "pray for the young kids" on the shows and to "turn off our [television] sets". [8]

In 2006, he decried the establishment of the monotonic orthography, as a "globalisation plot" to impose "cultural uniformity" and "support the sale of multi-national Olivetti's typewriters". He has also sarcastically referred to the lawmakers' "kindness of relieving our race from the darkness of Aristophanes" [9], with regards to the same matter, despite the fact Aristophanes never wrote in the polytonic system, which was a later invention.

The archbishop has also been intensely critical of globalization, to which he has referred, on repeated occasions, in disparaging terms as a global, or alternatively, "foreigner" plot to deprive people of their national identities. In 2004 he criticized globalization as a "bulldozer that is out to demolish everything, on account of those who want to rule the world without resistance or obstacles"[10], adding that Greeks live in a paradise compared to other Europeans, because "they have a strong faith, they build churches, follow traditions, and resist globalisation". In 2006, he castigated gloabalisation as a "crime against humanity" and "a vehicle to Americanize the life of all humankind"[11]. He has also claimed that "globalization wants to turn us into gruel, soup, sheep, or better yet, turkeys, so that we may be led with a cane"[12]. In 2002, he asked students in a Greek school whether they wanted to be "mince meat or meat", explaining that "foreigners want to turn us into the meat-grinder, while meat is a solid thing".[13]

The archbishop had also been criticised for frequently judging the internal and foreign policies of the elected Greek governments, usually during sermon in liturgy. In 1999 he complained during sermon that the Education Ministries were "experimenting on students" with their continuous innovations on the educational system, causing the dissatisfaction of Gerasimos Arsenis, who was pushing substantial changes in secondary education at the time.

Christodoulos created a major controversy in 2003 when he denounced proposals to let Turkey enter the European Union, calling the Turks "barbarians". [14] Despite the fact a number of Greeks are also opposed to Turkey's entrance (as, indeed, are many other Europeans), Christodoulos' statements were seen as an unwarranted intervention in foreign affairs, based on a discriminatory and racialist logic. It has to be noted, however, that statements to the same effect had been made -and retracted- in the past by former Foreign Affairs Minister Theodoros Pangalos.

The archbishop had been accused of fusing racialist stereotypes and homophobic ideas when, on another occasion, he proclaimed that "Because we are not German, neither French, far more not English, but manful Greeks, we are Orthodox Christians". [15]

Christodoulos had also been criticized for supporting what many Greeks feel to be an arbitrary, nationalist, and ultimately ahistorical division between the Greek and European civilization. In 1998, he declared that "when our ancestors gave the lights of civilization, they [Europeans] were living up in trees"[16]. In 2003, he claimed that "history teaches us Europeans were always out to harm us. Long before the sack of Constantinople, Hellenism had been subjected to the horrible experience of the Franks, who wanted to achieve, by any means possible, its extinction".

After the September 11th attacks on the World Trade Center, parts of the public were shocked to hear the archbishop attribute the attacks to "despondent men" who acted "out of despair, caused by the injustices of the Great Powers". Critics attacked the archbishop for what they considered to constitute an underhanded justification of the terrorist act. Christodoulos denied the allegation and responded that he condemned the attacks.

Christodoulos has also encountered serious difficulties within the Greek Orthodox Church. In 2003, he fell out with Ecumenical Patriarch Bartholomew, the head of the Church, over who should have the final say in the appointment of bishops in northern Greece. As a result Christodoulos' name was striken off the Diptychs of the Church as a punishment. He was reinstated three months later, as the conflict seemed to be coming to a resolution. [17]

The archbishop's problems within the church came to a head in early 2005, when a series of scandals emerged that severely damaged the church's image. Christodoulos himself was drawn into the scandal when he was forced to admit links with priest Giosakis, imprisoned on charges of stealing icons and manipulating court judgments through an illegal circuit which arranged the bribery of judges. Christodoulos initially denied knowing the man, until a high-ranking judicial member, unrelated to the scandal, revealed that he had met the Archbishop in the presence of Giosakis.

He was also criticised for his connections with Apostolos Vavylis, a convicted drugs smuggler whom he had earlier also denied ever meeting. Vavylis was said to have lobbied on Christodoulos' behalf for the election of Jerusalem Patriarch Irenaios, a Christodoulos supporter. Vavylis' tactics included distributing homoerotic pictures of the patriarch's leading opponent in an apparent smear campaign. [18] Despite calls for his resignation, Christodoulos vowed to stay on and "clean up" the church. [19] In the height of the controversies, he decried "scandal-makers" who were out to make sure that "those who bear the flag", like himself, were "eclipsed" so that [20] "globalization came to pass". 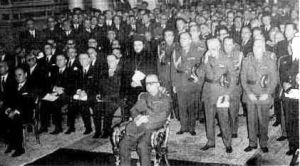 A younger Archbishop Christodoulos in the middle behind Colonel Patakos