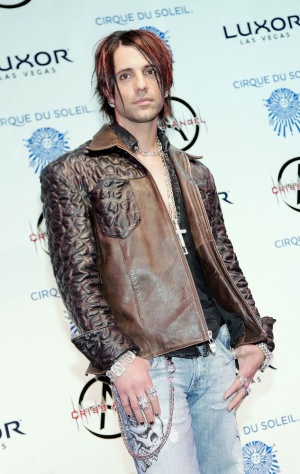 Criss Angel (born Christopher Nicholas Sarantakos on December 19 1967) is a Greek American magician, musician, stunt performer, and actor. He is best known for starring in his own television show, Criss Angel Mindfreak.

Angel was born on December 19, 1967 and raised in East Meadow, New York. Angel grew up loving music (playing drums and accordion) and has always had an interest in magic. His parents are John and Dimitra Sarantakos. He has two brothers, Costa and JD, as well as two cats, Minx and Hammy (short for Hamlet). One of Criss's biggest influences has been his father, who died from stomach cancer. Criss Angel first became interested in magic at the age 6, when his Aunt Stella showed him a card trick. Two of his biggest magic influences are Harry Houdini and Aldo Richiardi. As a teenager, Angel performed at birthday parties, at night clubs, at home to entertain his family, and at private events doing magic. He played in a band called AngelDust with friend Klayton Scott who produced and helped arrange the music for his show, Mindfreak.

Angel performed in World Of Illusion at Madison Square Garden in 1998. Criss then scored a show on Broadway titled "MINDFREAK," which ran up until January 6, 2003. He also starred in several television specials. His Broadway production, "Criss Angel Mindfreak," ran for 600 1/2 performances at The World in the The World Underground Theater in Times Square, ending January 6, 2003.

Angel was the star and creator of the A&E Network show Criss Angel Mindfreak. Seasons 1 and 2 were filmed at the The Aladdin in Las Vegas, with Season 3 at the Luxor Hotel. Premiering on July 20, 2005, the illusions have included walking on water, levitating above the Luxor Hotel, floating between two buildings, and cutting himself in half in full view of an audience. Guests have included Celldweller, Korn's Jonathan Davis (who also co-produced the show's theme music), Rob Zombie, Carrot Top, the Amazing Johnathan, Vince Neil, Mandy Moore, Penn & Teller, Jeff McBride, Jason Hervey, Dog the Bounty Hunter, Lance Burton, Ice Cube, Flava Flav and Jamie Kennedy. Angel is scheduled to begin filming Season 4 of Mindfreak in September of 2007, and the show is scheduled to run for two more seasons after that.

Angel is scheduled to appear in a new illusion-based Cirque du Soleil production at the Luxor Hotel in Las Vegas. The new show is expected to open in September, 2008.[1] Angel has recently said that there are plans for this attraction to run for 10 years, including 4,600 shows with a possible 5 year renewal option of his contract.The show is a permanent Las Vegas show and will not be in any other city.

Criss Angel won the Academy of Magical Arts' Magician of the Year award in 2005 and the IMS Magician of the year for 2007. Many magicians have also shown how Angel performs his tricks. Angel has written a book titled Mindfreak: Secret Revelations, which was published April 24, 2007 and hit the Los Angeles Times The Best Sellers list the week of May 13th, 2007

During the second season, Criss Angel introduced a "Spectator's Point of View camera", a hand held video camera given to a random person in the audience to shoot the action in any way he or she wants. However, the camera has seemingly fallen out of favor as the second season continued, only showing up very sporadically. He has even revealed the methods for some of his tricks to viewers at home on TV and in videos, although the effects revealed are usually very simple such as making a toothpick disappear, picking a pocket, or making a Styrofoam cup float. More complicated illusions, such as self-disappearances and stopping his pulse have not been revealed.

In the first episode of season three of his series "MINDFREAK", Angel demonstrated his levitation skills at the Luxor Hotel, Las Vegas. In one scene, he appears to levitate from the 26th floor inside the hotel, slowly descending through the hotel's atrium to the entrance lobby. Later, he levitated above the 500-foot-high apex of the hotel at night, in the middle of the famous Luxor's spotlight which has an output of 42.2 billion candlepower.[2] This episode was viewed by almost 3 million viewers making it the most watched episode in series history and the number one show in its timeslot on cable television.

Angel says he does not have any paranormal powers, and "I do not believe that anybody has the ability to do anything that's supernatural."[3]

Other television appearances and movies

Angel was the featured guest starred on CSI: NY on February 28, 2007 in an episode titled "Sleight Out of Hand" as a character named Luke Blade, a famous magician whose assistants die in unusual circumstances.[4] He performed three illusions (being sawed in half, being lit on fire, and a version of his "Submerged" illusion). Angels' most notable television appearances include but are not limited to Las Vegas, The Oprah Winfrey Show, The Late Show with David Letterman, Late Night with Conan O'Brien, The Late Late Show with Craig Ferguson, The Ellen Degeneres show, as well as VH1's Rock Honors Awards performing and introducing legendary Honoree Ozzy Osbourne. In June 2007, Angel appeared on the cover of the DUB magazine. He also appeared on CNN's Larry King Live on July 12, 2007. On June 8, 2007, he stated on the Late Late Show with Craig Ferguson that Richiardi was one of his greatest influences.

Criss Angel is cast to star in the upcoming movie Mandrake the Magician[5].

The first two season DVDs for Angel's television show have been the #13 and #28 best selling in the art of magic.