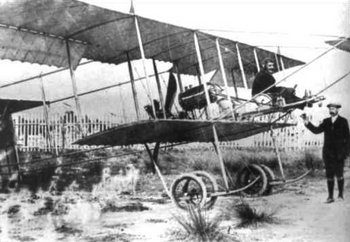 On May 13, 1912 First lieutenant Dimitrios Kamberos flew the first military Henry Farman aircraft, and later participated in Army manoeuvres. In June of the same year while the establishment of a Naval Air Service was being examined, Kamperos, having converted the first Henry Farman «Daedalus» into a hydroplane flew at an average speed of 110Km per hour thus achieving a new world record. At the same time another pioneer, Alexandros Karamanlakis, conducting a flight from Phaleron to Patras with a 50-hp Bleriot aircraft performed an unsuccessful ditching in the Gulf of Corinth and met his death, thus opening the pantheon of the sacrifices of the Hellenic epopee in the skies.

Dimitrios Kamperos not only was the first Greek military pilot, he survived the Balkan Wars and the First World War. He was chief instructor for many years in the Greek military flying school and eventually died of cold and hunger, during the German occupation of 1941-44.