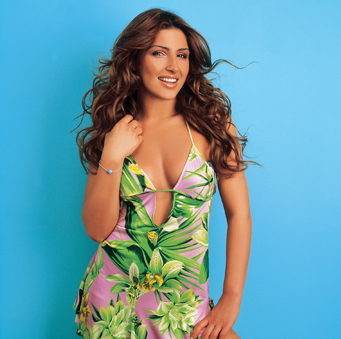 Elena Paparizou (Έλενα Παπαρίζου in Greek characters; born January 31, 1982 in Örgryte, Gothenburg, Sweden) internationally known as Helena Paparizou is a popular singer, best known in Europe for winning the Eurovision Song Contest 2005 for Greece with the song, My Number One.

Elena Paparizou was born in Gothenburg, Sweden, to Greek immigrant parents. Elena's artistic talents and eagerness to excel became apparent very early, and she was soon involved in singing, dancing and acting, training in combination with her academic studies at school.

Elena, determined to succeed and fulfill her dreams of being an entertainer, joined childhood friend and fellow Swede-Greek Nikos Panagiotidis, at the age of seventeen, to form Antique. The duo quickly signed their first record label contract, with the Swedish record label Bonnier. Their debut single, Opa Opa, became a huge hit, reaching number one on the single charts and gaining gold status following its release in August [[1999]. The band's subsequent fame and success, strongly associated with the international promotion of Greek culture, led to them being selected as Greece's representatives for the Eurovision Song Contest 2001 in Copenhagen. The band reached a third place with the song, (I Would) Die for You. Although equalled by Sakis Rouvas' effort Shake It in 2004, it was Greece's highest place in the competition until Elena won the contest as a solo artist in 2005.

Antique's success in the Eurovision Song Contest led to them recording multiple platinum albums, playing a European tour, and collaborating with many other Greek artists. Paparizou has admitted that Greek music had been something of an acquired taste for her, saying that the name 'Antique' was probably a reflection of her childhood impression of it being something rather distant and old-fashioned; something that she only really associated with her summer holidays in Greece.

Despite the group's success, Antique broke up in 2003 on good terms, as the band had "run its natural course," and Elena set about going solo. She signed a solo recording contract with Sony Music and, in December 2003, released her first solo single, Anapandites Klissis (released in English as I Don't Want You Here Anymore), a song written especially for her by singer and songwriter Christos Dantis. The single sales were strong, and it received a Gold certification in Greece.

During the winter of 2003-2004, Elena appeared alongside one of Greece's biggest male singers, Antonis Remos, at the Studio Pireos nightclub. In spring 2004, she released her first solo record, Protereotita from which Andithessis (Opposites), Anamnissis (Memories), Katse Kala (Behave Yourself) and Stin Kardia Mou Mono Thlipsi (Sorrow In My Heart) became major hit singles. Her success brought her to the Fever nightclub for the winter season 2004-2005 alongside Sakis Rouvas.

Because of her popularity in Greece, where she ended up spending more and more time, she was approached to represent the country for a second time in the Eurovision Song Contest 2005. Elena performed My Number One, Let's Get Wild, and OK on the Greek national final, with My Number One winning the televote. There was also a song called "The Light In Our Soul", but it was later disqualifed due to it being released prior to the contest breaking the rules. The song went onto win the final contest (with backing vocals provided by Cypriot former Eurovision-participant Alexandros Panayi), and brought the contest to Greece for 2006 for the first time in the contest's history.

Elena re-released her first album Protereotita in Greece, with a second CD containing her Eurovision entrants, and English translations, such as I Don't Want You Here Anymore, Andithessis, and If You Believe Me as well as a ballad version of Louloudia . The 10 track CD was also available separately for those who already owned her debut album. A 16-track compilation of the Eurovision entrants and songs from her debut album was also released in Sweden under the title, My Number One.

In the summer and fall of 2005, Elena toured in Australia and North America with Greek artist Nikos Kourkoulis, selling out many venues. She was also named the official ambassador of the Greek Ministry of Tourism, and My Number One was used as backing music to their international television advert.

On July 14 2005 King Carl XVI Gustaf of Sweden caused controversy by placing his hand on Helena's back, lower than what is socially acceptable. It happened after she had performed at his daughter's birthday celebrations; according to the Royal Court, "his hand slipped." [1]

In the fall of 2005 Elena went to studios and recorded a new CD single called "Mambo!". The single included "Mambo" as a Greek and English version, "Panta Se Perimena", and "Asteria". The CD single stayed on the Greek charts for 10 weekss, including Christmas week, and reached platinum status. The track was also released in Sweden in April 2006, following a succession of hit singles there taken from the album, My Number One. Elena's debut album was re-issued for a third time in Greece to contain a third CD (in addition to the actual album and the Eurovision disc), containing both English and Greek versions of Mambo! and 3 other new Greek songs.

In the end of 2005, Elena went back to studio to work on her second Greek language album and her first official English language album.

Elena's second Greek langauge album, Yparhei Logos, was released in Greece on April 12, 2006. The album consists of 2 discs, the first featuring 14 brand new tracks, including Mambo! and the second featuring 9 live tracks from her "Mad Secret Concert" (including covers of Don't Speak by No Doubt, Outside by George Michael, Smooth Operator by Sade, Like A Prayer by Madonna and Just Walk Away by Celine Dion) as well as 5 new non-album tracks, and a remix of the title track, which is the second single. The video for that single, Yparhi Logos, aired on the day the album was released. In parts of the video Elena does not sing alone with the music this may be because in the near future Elena will release the song in English and will use the same video. The first time people got to hear the song was when it premiered live form at the Arion Music Awards. Gigolo is another song on the album, which is likely to be the third single, as it has been sent to Greek radio.

The album Yparhei Logos has entered Greek charts at number one.

Elena speaks fluent Greek, Swedish and English, and has also studied French. She has mentioned that her dream would be to make a song with lyrics comprised of words in every language in the world.

The correct spelling of her first name is a subject of confusion. In Greek, there used to be an accent called a spiritus asper accent to indicate the 'h' sound (just as the 'h' in 'Helena'). This was abolished several centuries ago, and the Greek name 'Έλενα' was already pronounced 'Elena' at the time of Elena Paparizou's birth. The spelling with the spiritus asper however was maintained in a system known as polytonic orthography which, having no vocal significance, finally ceased to be used some decades ago.

Elena Paparizou on the other hand, was born in Sweden where the name's version 'Helena' exists, and one could presume with little uncertainty that many Swedes transliterated her name as 'Helena'. That is to say, Paparizou's name is Elena, but has been misspelt 'Helena'.

Her name has always been spelt 'Elena' during her career in Greece, but in Sweden, and in various other countries as her second appearance in Eurovision (in 2005) approached, the spelling 'Helena' grew more common, and the songstress herself admitted in a Swedish interview that she was forced by her record company to spell her name with a 'H'. Her official website is HelenaPaparizou.com, and the "H" appears on all official releases outside of Greece. The singer, however, has made it known that her name is correctly written as 'Elena', according to the exact transcription from Greek, and this is how she prefers to be known.