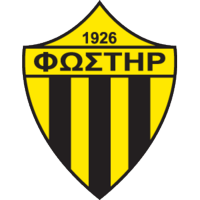 Fostiras FC are a historic club based in the southwestern Athens suburb of Tavros. They were founded in 1926 and arose to Athens' A' Division in 1953, in the days of local championships. Their ability to upset bigger clubs soon won them their nickname: Giant Killers (Φονεύς των γιγάντων).