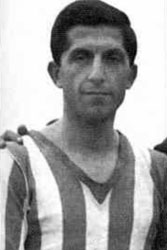 Thanasis Bebis was born in 1929 and was to Greek football in the 1950s what Mimis Domazos became in the 1960s: second to none in technique, precision and flexibility. He played mostly in the midfield but also, at times, in the front line. Bebis started his career at Akratitos Petralona moving to Fostiras FC in 1946. In 1949, he made the big jump to Olympiakos Piraeus. He would stay with the red-whites for nearly two decades before moving on, in 1963, to Vyzas Megara as a player/coach. At Vyzas, he ended his playing career.

During his career he was capped 17 times by the National Football Team of Greece scoring 1 goal, the matchwinner in a World Cup qualifier against Isreal.